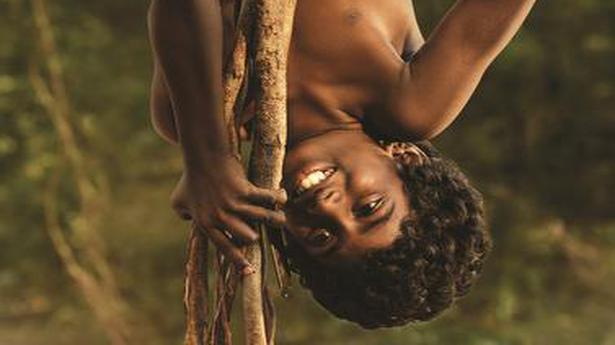 Original stories are rarely heard, forget about being made into cinema. Debut director Ashwin Gangaraju’s story comes as a breath of fresh air to Telugu cinema. Aakashavani has a sensible plot with a parable.

The setting is an unpolluted agency area where a group of 40 people are born, raised and have lived all their lives without seeing a stranger. Their only God is a lingam-shaped stone which is replaced or upgraded by a discarded malfunctioning radio; the sound that comes now and then is presumed to be a talking God, the Aakashavaani.

While the director completely relies on the story to work, Suresh Raghutu’s lens captures the beautiful Paderu area and the agency settlement in its greens and browns. This is not an easy film to write and execute. There are many newcomers along with a few familiar faces, but they all come together and do not let your mind wander. At the end of the film, you are reminded of the moral science class at school.

On the other side of the settlement is a king, Dora (Vinay Verma), and his yes men who continue to live off the tribals who seem to be uncivilised in the conventional manner of speaking. The tribals are harassed, beaten and forced to consider the king as their God. Dora’s chieftain from the tribe, Sambhadu (Teja Kakamanu), makes life miserable for them. .

Dora who has plenty of wealth but cannot protect his sick and dying son, tells Sambhadu, “Kill their dhairyam (courage) and daivam (God); they shouldn’t listen to Aakashavaani any more.” The chieftain passes a diktat: “gorrellaku kommulu undakoodadhu, goodaniki dammulu undakoodadhu” (the goats shouldn’t have horns and the village shouldn’t have guts).

The story explores what happens when a school teacher Chandram master (Samuthirakani) steps into this setting and tries to make the tribals see the true picture. A Hiranyakashyap-Prahlad story reference works as a catalyst and also a denouement giving the story a perfect closure.

There is so much you can gather from the dialogues as well and the well-written screenplay. Initially the film keeps you guessing about where the story is headed, but the subtle entertainment creeps in by the interval. There’s a sprinkling of physics and a takeaway about faith.

Newcomer Mime Madhu as the doting father Ranga does a fabulous job. Samuthirakani and Vinay Verma are apt for their roles. The film has a number of theatre actors who have mingled with the junior cast so well and have allowed the story to move forward seamlessly.

The film has no loud soundtrack to heighten the atmosphere and the background score is good. Aakashavani is like a folklore, do watch it and the director will not disappoint you.