‘Annabelle Sethupathi’ movie review: A comedy in which only the uncomic portions work 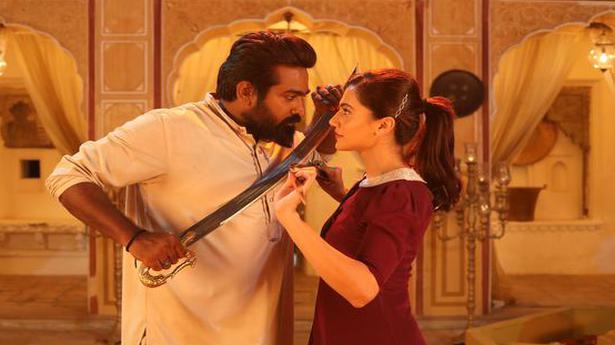 Around two-thirds of the film in, Shanmugam —rather, the spirit of Shanmugam — (played by Yogi Babu) narrates a past tragedy to Rudra (Taapsee Pannu). The latter finds it ridiculous. She asks him, “What new stories are you coming up with?”. Shanmugam sighs. “Who tells new stories these days?” he asks, probably taking a dig at Tamil cinema, casually breaking the fourth wall for a moment.

Deepak Sundarrajan’s first film perhaps knows it’s not telling a new story. For it involves a royal couple who gets murdered, a scheming villain, reincarnation, revenge, poetic justice, and like in quite a few Tamil horror flicks these days, the promise of a sequel. Been there… seen that.

Self-deprecation, hence, works. The story, after all, isn’t as important as how it’s told. But that’s where the film falters; Annabelle Sethupathi doesn’t address what it makes fun of.

A cop (played by Linga) brings Rudra and her family (Raadhika, Rajendra Prasad, and Sunil) — a group of thieves —into his grandfather’s (Suresh Chandra Menon) palace to see if it is haunted. The spirits of his great-great-grandfather Kathiresan (Jagapathi Babu), a few other family members, and the palace cook Shanmugam are indeed trapped inside the palace. The story of how and why they all died is told somewhat interestingly through the aforementioned flashback. But Deepak Sundarrajan decides to get there only in the second half. Until then, the film lurches from one comic set-piece to another, most of which are tiringly contrived.

The supporting cast (including Subbu Panchu, George Maryan, ‘Jangiri’ Madhumitha, Chetan, Devadarshini and others) clown around, desperately trying to sound and look funny. Neither their dialogues nor their actions work. There are lines like, “Paavi ah suthradhuku, aavi ah suthradhe mel!”. Rhyme should consider retiring from Tamil cinema. The physical comedy falters as well. We see a character frustrated at being unable to kick a spirit because, um, it’s a spirit and she can’t touch it. One wants to ask what Duraikannu Vaathiyar does in Sarpatta Parambarai: “Enna joke kaatreengla?”

Taapsee, too, fails to impress in these portions. Vennela Kishore makes a cameo, but his dubbed lines and exaggerated histrionics seem out of the place.

Some of the ridiculous lines uttered by Yogi Babu (like “Ivan enna moonji-la ye murukku puzhiyaraan?”) work because of his distinctive delivery. But this is the kind of thing he says in most of his films. Unless he reinvents his comedy, it could get dull (it probably has for some of us). Having said that, Yogi Babu isn’t just about punchlines; he’s capable of selling us some serious stuff too (like we saw in Mandela). Maybe someone should cast him as a villain?

Annabelle Sethupathi does gets somewhat better when titular characters Annabelle (Taapsee again playing an Englishwoman) and Veera Sethupathi (Vijay Sethupathi) appear. The latter, a king, gets an introduction shot where he feeds a nut to a squirrel and pets it. It’s to establish his benevolence, but it looks cool too. Sethupathi’s nonchalance, which sometimes seems impassive, works here. The character is largely one-dimensional, but the actor’s little gestures and expressions make it likeable. Take the scene wherein Kathiresan sends a bunch of sword-wielding assassins to Annabelle and Sethupathi’s magnificent palace. Sethupathi gently pushes his newly-wed wife behind and says, “Nee ukkandhuru; naan virundhu vechutu vandharren,” like a Tamil cinema mass hero™ does. But when Annabelle insists, “Let’s fight. Together,” he pauses for a moment to look at her and smile. He turns his attention towards the assassins, but is unable to contain himself from smiling at her once more. So far, we’re shown that he admires her beauty (the palace itself is a Shah Jahan-esque tribute to her) but now he admires her valour.

The film, hence, isn’t entirely unwatchable. The uncomic portions, thanks mainly to Vijay’s performance, kind of work. But then, that’s not a good thing to say about a comedy, is it?