Axelle Carolyn on ‘The Manor’: ‘Growing old is scary at any age’ 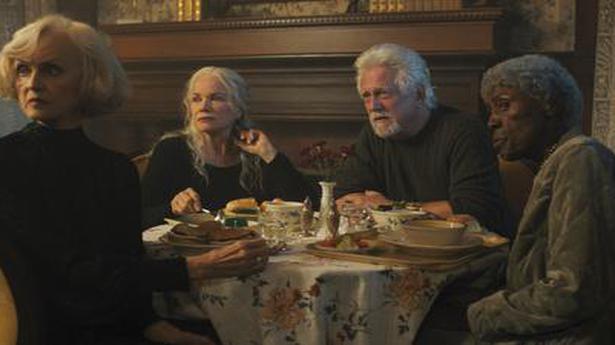 The Belgian filmmaker says there is no horror in ageing; that is a natural process. It is what we make of it as a society that is horrifying

Axelle Carolyn says she was always into horror. Speaking on a video call from a room in Los Angeles, full of classic horror movie posters, the director of The Manor, the eighth instalment of the Welcome to the Blumhouse film series, says, “Even as a little child, I was into ghosts, skeletons and spooky things, even in cartoons. There is a Disney cartoon that I remember very specifically being the beginning of my obsession with skeletons. Little black-and-white skeletons came out of rooms, did a little dance, and when the time was up, went back to their grave. It was adorable.”

The Belgian filmmaker describes herself as being the kind of child who was anxious about death. “That was my way of dealing with death — look, you can be a cute little skeleton who dances at night! There is comfort in thinking that there is potentially something else out there that we cannot explain, that we do not know.”

Characters, Carolyn says are the basic building blocks for a story. “When I come up with a story, I always try to be led by the characters and the emotions they go through, and what I want the audience to feel.”

The Manor tells the story of an ageing ballet dancer, Judith (Barbara Hershey), who checks into a nursing home after suffering a stroke. “The idea of growing old is scary at any age,” says the 42-year-old filmmaker says of the basis for The Manor. “Even as a little child, it was scary to me. I saw my granddad and dad in a nursing home. Those experiences made a big impression on me. I had to somehow process it. When something traumatic happens to us, we sometimes deal with it through stories. That is why I like watching horror and it is also why writing and directing horror feels like therapy.”

In The Manor, as people being to die mysteriously, Judith has to convince people of a supernatural presence. “When you get older, very often people do not believe you. If you were 30 and you say ‘I’ve seen a monster’ people say, ‘Tell me more’. If you are 85, however, and you say, ‘I have seen a monster’ people will think, ‘That is nice Grandma.’ We dismiss old people differently and that was part of what I thought was terrifying.”

Elderly as the other

Ageing per se is not to be feared, says Carolyn. “There is no horror in growing old; that is a natural process. It is what we make of it as a society that is horrifying. We place people in nursing homes and treat them like the other. We take away their phones and freedom. We do not let them get out of the house when they want to. We say it is for their protection and safety but what we really do is, take away their agency, and the control that they have over their lives. That is the scary part and that is what I would like people to be able to discuss. There is a debate that needs to be had. What do we do when we have an ageing population is an issue that is going to be more important, as time goes by.”

Carolyn says her favourite horror movies are from the 60s and before. “I love Universal Classic Monsters and Hammer Films. Horror changed drastically from 1968, when Night of the Living Dead came out, and later on Stephen King. Horror is constantly evolving, reflecting who we are, our society and the fears we have.”

Commenting that she enjoys the variety horror aspires to, Carolyn says, one could go back to the basics and make a classic horror movie, which is what The Manor aspires to with its Gothic setting. “A horror movie does not just have to be scary, it can be all kinds of different things and you can convey different themes and emotions.”

The Manor is streaming on Amazon Prime Video