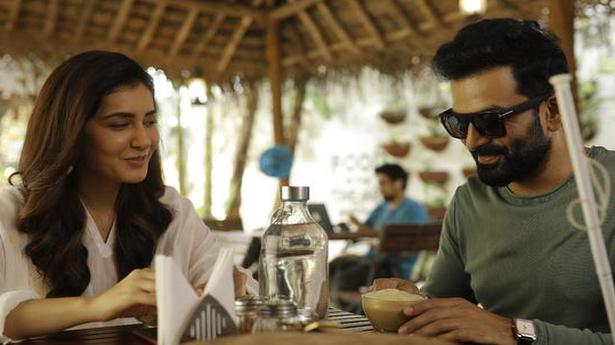 This Malayalam remake of ‘Andhadhun’ does not try too hard and settles to recreating scenes, almost as a carbon copier

A sheer lack of excitement marks the act of driving through an overly familiar route, where one can navigate around every pothole and blind-turn mechanically, without troubling the brain much. There is something similar about watching a remake, even if the original is one of the most exciting thrillers to have been made in the country in recent years. Especially so, if the remake does not try too hard and settles to recreating scenes, almost as a carbon copier.

In Andhadhun, which released in 2018, director and screenwriter Sriram Raghavan pulled out one trick after another from his bag to surprise the audience who assumes at every point that they have figured it all out. Ravi.K. Chandran has the comfortable cushion of that inventive script while making Bhramam.

For musician Ray Mathews (Prithviraj), his ‘blindness’ is an effective tool for survival and to open many doors. When yesteryear star UdayKumar (Sankar) invites him home to give a musical anniversary surprise to his wife Simi (Mamta Mohandas), Ray does not have a clue what is in store.

Also Read | Mamta Mohandas: My role in ‘Bhramam’ is one of the most exciting that I have done

Ravi K. Chandran chooses to place Bhramam in Fort Kochi, but despite the place markers, it somehow does not feel like a film set in Kerala, despite some references like serial killer Jolly and CID Ramdas getting thrown in. The failure to imbibe the soul of the place is also reflected in how it falls short of capturing the soul of the original film. This happens despite the film recreating almost every scene as such from the original, including the brilliantly-written centre-piece sequence of a murder and its coverup, all accompanied by some pleasant music from the piano.

One of the more obvious ways in which the film falls short is in its performances. Tabu and Ayushman Khurrana had set the bar so high, revelling in the unpredictable and wicked characters given to them, that it is hard to match them. One thing that Bhramam gets right is in using actor Sankar’s own past as a film star to flesh out the character of Udayakumar, who often takes nostalgic trips to his days as an on-screen hero and scrolls through YouTube to see what the current generation talks about him. But then, in the scheme of the entire film, this is just a minor detail.

It is natural that one would think about the whole purpose of this remake, when there is no attempt to give a fresh or unique take. The question remains as to whether there was a thought made about any kind of gain, other than that of the financial kind.

For someone who has already watched Andhadhun, the remake would be a pointless exercise in identifying all the shortcomings. But, for a viewer who has not watched the original, the script filled with surprises, can still make it an exciting watch, despite some obvious shortcomings.