Boney Kapoor on ‘Valimai’: I have never seen a fan following like Ajith’s 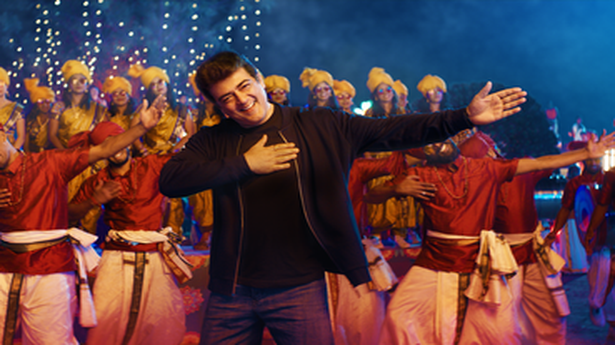 Producer Boney Kapoor spills the beans on shooting stunt bike sequences in Russia for Ajith Kumar’s upcoming film, his take on the #ValimaiUpdate phenomenon, and more

Both have been asked Valimai updates in recent times. Starved of news about Thala Ajith Kumar’s upcoming Tamil biggie from its makers, fans of the actor have been posing the question to people from different walks of life.

Naturally, “Valimai update” became a viral trend. So much so that it forced the makers to issue statements, and finally, post the update itself… with official posters and the recently-released teaser — fans seem to be satiated.

Heaving a sigh of relief and happy with the response is producer Boney Kapoor, the man in demand among Ajith fans, considering the elusive nature of the star. In a telephonic interview from Mumbai, the producer shares the latest on the film:

How have reactions been to the recently-released teaser video?

It has been extraordinary. It shows the effort put in by Ajith, Karthikeya, director H Vinoth, and the entire stunt team.

How did the team go about shooting the bike stunt sequences, which many say will be a highlight?

We waited for over a year to shoot this six-day-long sequence. Ajith was most excited about it, and we did not want to compromise on its quality. We roped in one of the best stunt teams from Russia, and shot the sequence in a place 300 miles from Moscow. Many locals from that little town came along to greet Ajith on the set!

As a producer, what went through your mind when so many people were asking about updates?

Fans are well within their rights to ask for updates, because they love Ajith a lot.

However, I did not want to mislead them. I wanted to give out material only when there was something concrete at hand. While most of the portions were shot over a year back, we had to patiently wait to complete this crucial sequence. I have always been a directors’ producer. If I have confidence in the director, like I do with Vinoth, I will ensure that the vision is fulfilled. What gave you that confidence in Vinoth, who is relatively new to the industry?

His work will talk. He believes in expressing himself through his films. It was Ajith who sent Vinoth to my Mumbai residence to narrate some film ideas a few years back. I remember my wife [the late actor Sridevi] conversing with him in Tamil, and being impressed with his story lines. His vision was clear, and ours has been a happy journey. In fact, my next film will also be with Ajith and Vinoth.

As a person producing films since the ‘80s, what do you think is unique about Ajith?

Less is more is an adage that fits him well. He never believes in public appearances, and keeps away from all PR activity. This means that the appetite of audiences is never fully fulfilled.

A still from ‘Valimai’

I have never seen or experienced something like that before. There were thousands of people waiting outside the theatre well past midnight, to try to watch the first show. When I walked out after the film ended, there were thousands waiting for the next show.

There are chances of Vijay’s Beast also being released for Pongal 2022. If that happens, Ajith and Vijay, two of the biggest stars of Tamil cinema, will clash at the box office. Your thoughts?

Well, if it does, Pongal will get brighter for the fans of both stars.