‘Colin in Black and White’ trailer: The story behind the sportsman who ‘took a knee’ against racism in the U.S. 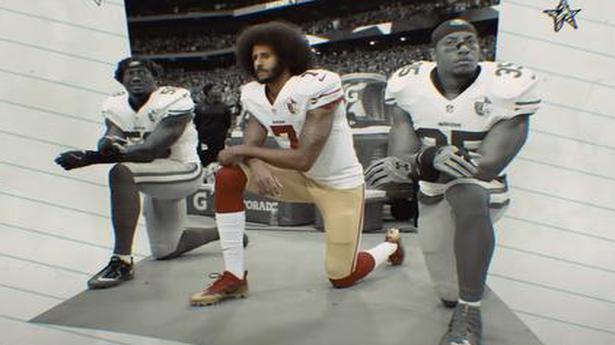 Produced by Ava DuVernay, ‘Colin in Black and White’ is a Netflix biographical drama miniseries on NFL quarterback Colin Kaepernick’s formative years leading up to him becoming a footballer and activist

You don’t know Kaepernick until you know Colin. From co-creators Ava DuVernay and former National Football League quarterback Colin Kaepernick comes Colin in Black and White, a new limited series that chronicles Kaepernick’s coming-of-age story, tackling the obstacles of race, class and culture as the Black adopted child of a white family.

The series, to be released in six episodes of 30 minutes each, stars Jaden Michael as a younger Colin before reaching the highest levels of American football as an NFL quarterback and becoming a cultural icon and activist; Nick Offerman and Mary-Louise Parker as his well-meaning parents Rick and Teresa; and Kaepernick himself, who appears as the present-day narrator of his own story, guiding viewers through an array of historical and contemporary contextual moments.

In 2017, DuVernay met Kaepernick, who had been propelled into the spotlight after advocating and protesting for social justice issues both on the field and off.

Back when he was a quarterback for the San Francisco 49ers, Kaepernick first took the knee (a symbolic gesture against racism whereby an individual kneels upon one knee in place of standing to attention for an anthem or other such occasion) during the United States national anthem before a football match in 2016, stating he could not stand to show pride in the flag of a country that oppressed Black people. In 2017, Kaepernick was released by the 49ers. The anti-racist statement has since become a prominent symbol in sport and during protests. It has been a feature of Black Lives Matter protests, including those following the murder of George Floyd.

Speaking on the series and the messaging behind it, Kaepernick explains in a Netflix blog post, “I did not have a lot of references or guides growing up to help me navigate some of the negative experiences or interactions I went through as a young Black kid. When we were thinking about telling this story, we wanted to explore that idea more and give people references of how these situations can impact and shape one’s identity and growth.”

He hopes audiences of colour feel empowered and less alone as they watch Colin in Black and White. “I want Black and Brown kids and their communities to find guidance in how we can combat racism and oppressive systems. I hope someone can see that they too can come out on the other side and be able to say, ‘I faced those struggles. I’ve worked through them, and I was able to be successful and come out the other end, keeping my dignity and my identity intact.’”

DuVernay adds, “Bottom line, I was interested in the process of becoming the star of your own life. This doesn’t mean not being of service to others or being selfish and ego-driven. It means having the confidence to stand up and stand strong for oneself so that you can be the best version of yourself… We want to remind people to honor oneself. Because if you’re still standing, and you’ve experienced any of these challenges, then you are on your path. Keep taking your steps. One after another, after another. Because there is glory in your steps.”