‘Feels Like Ishq’ review: All you need is (not too much) love 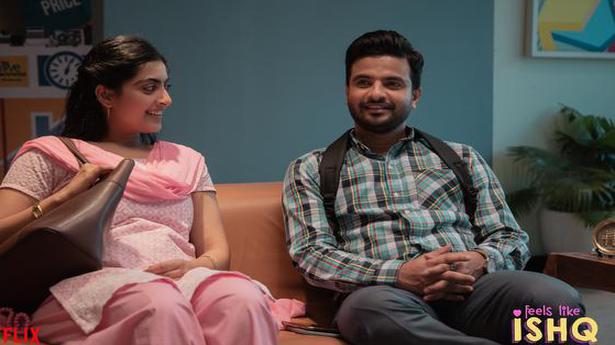 Since Netflix, it seems, has vowed to release anthologies every few months, we get another one — after Lust Stories, Ghost Stories, Paava Kadhaigal, Pitta Kathalu and others — in the form of Feels Like Ishq.

It is a compilation of five boy-meets-girl (plus one girl-meets-girl) stories, each lasting approximately half an hour. Unlike Lust Stories (which also dealt with relationships), the shorts in this anthology are light-hearted. The brief for the writers and filmmakers, it seems, was to come up with a “sweet love story” that would give the target audience — teens and 20-somethings — that quintessential “warm, fuzzy” feeling.

The writers and directors — Monisha Thyagarajan and Ruchir Arun (Save The Da(y)te); Gazal Dhaliwal and Tahira Kashyap Khurrana (Quaranteen Crush); Sulagna Chatterjee and Danish Aslam (She Loves Me, She Loves Me Not); Saurabh George Swamy and Anand Tiwari (Star Host); Arati Rawal and Sachin Kundalkar (Interview); Shubhra Chatterjee and Jaydeep Sarkar (Ishq Mastana) — have sincerely attempted to make their stories sweet. But after binging the shorts, instead of warm and fuzzy, one feels the nausea of overeating desserts.

Sachin’s The Interview and Danish’s She Loves Me, She Loves Me Not stand out among the lot.

The Interview is the only film set outside the upper/upper-middle class milieu. Shahana (Zayn Marie Khan) and Rajeev (Neeraj Madhav), belonging to different states and faiths, meet at an interview for a salesperson position at an electronic store in Mumbai. She is an enterprising young woman and he, a Malayali newcomer to the big city, who struggles with his language and confidence. Neeraj’s (Moosa in Family Man) performance shines the most in the anthology. His character, at one point, confesses to Shahana, “I am Mohanlal in my village. But coming here… my Hindi… Nervous. Fully flop.” With his Malayalam-laced Hindi, shy smiles, and a few mannerisms (like adjusting his wristwatch and clasping the shoulder straps of his backpack), he brings alive a small-town guy trying to find his feet in a metropolis. Interview is also the least contrived film in the series.

She Loves Me, She Loves Me Not introduces a quirky, fourth-wall-breaking protagonist, Muskaan (Sanjeeta Bhattacharya), asking “What is love?” to a customer service agent of a dating app that she plans to delete on her 23rd birthday after browsing through profiles of a few guys. Muskaan falls for her cock-sure colleague, Tarasha (Saba Azad), but is conflicted about revealing her love. Queer romance in this film, thankfully, is neither treated as a gimmick nor overemphasised. The short also shows one of its main characters going through an anxiety attack, something that hasn’t been seen in mainstream films. Like Muskaan tells Tarasha at one point, “In any case, Bollywood wouldn’t get this love story.”

A still from the ‘She Loves Me, She Loves Me Not’ segment in ‘Feels Like Ishq’

The rest of the films in the series, however, fall in steadfast Bollywood territory.

Tahira’s Quaranteen Crush is just maybe an exception. It explores the nascent romance of a school-going boy in Chandigarh, Maninder (Mihir Ahuja). He likes a girl, Nimmi (Kajol Chugh), who has temporarily moved in next door to quarantine. He befriends her on the pretext of delivering food. He texts her from his mom’s phone (he doesn’t have one), pretending to be his mom. From his windows, he zooms into her room through the phone camera. But his innocence is established (there is a funny scene wherein he expresses awkwardness when his father —a bra salesman — explains the different types and sizes of his products). Then, when he reads a news article about a man arrested for stalking his neighbour, he questions his actions. Mihir is convincing as a schoolboy conflicted with these feelings. But this conflict gets resolved too soon and a happy ending awaits.

Probably due to the lesser-than-usual screentime, plots and characters seem unnatural or undercooked. It’s more evident in the rest of the three films.

Save The Da(y)te has a bridesmaid (Avni played by Radhika Madan) and a wedding planner (Jay played by Amol Parashar) hunting for the runaway bride, who develops cold feet on the eve of her wedding. The writer and maker perhaps wanted to talk about the pros and cons of marriage through their protagonists. So, in what’s supposed to be a high-tense situation while they search for a missing bride, we get lines like, “Marriage is like a mutual fund. High risks lead to high rewards, ” and “…they balance each other’s strengths and weaknesses. Communication is the key. Running away isn’t the solution.” There’s a bit of Geet-Adi (Jab We Met) vibe between the protagonists ,but most often they speak like characters from a script rather than people in real-life.

If Save The Da(y)te merely references Zoya Akthar’s Zindagi Na Milegi Dobara, Anand Tiwari’s Star Host does a hat-tip (intentionally or otherwise) by making one of its protagonists overcome fear and experience a profoundly life-altering moment by doing an adventure-tourism activity. Like Hrithik’s character in ZNMD, Tara (Simran Jehani) also finds love (Aditya played by Rohit Saraf) during a vacation.

The final short, Ishq Mastana, is set in the milieu of protests. The girl (Mehr played by Tanya Maniktala) here is a rebel with a cause and the guy (Kabir played by Skand Thakur) is self-centred. Through the film, we get songs by Kabir Das, discussions on religion, and lines like, “I don’t [fight for a cause] to change the world. I do it for me. So, that this world doesn’t change me.” No line sticks with us, no character stay with us. They all seem superficial.

Enough, Netflix, you probably need to take a break from anthologies. Oh, wait a minute… (realises Navarasa in Tamil is releasing in two weeks).