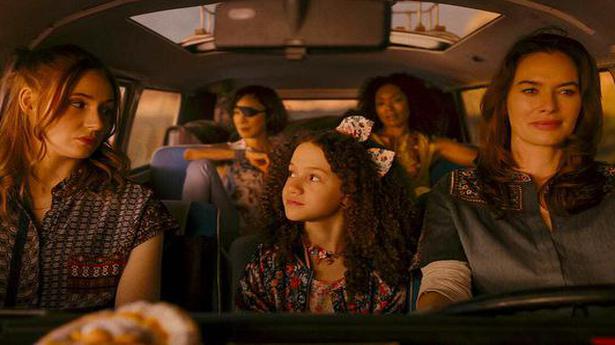 Israeli director Navot Papushado goes for a Tarantinoesque vibe, with extreme violence in slo-mo set to jukebox favourites, and the result is total mayhem

Which is my favourite part of the hugely enjoyable and utterly grisly Gunpowder Milkshake? Is it the thugs inhaling laughing gas and giggling stupidly even as horrible things are happening to them? Or that lovely, climactic battle with Bob Dylan insisting we leave now, taking what we need we think will last? Or that inventive car chase in the parking lot? I would have also chosen the shootout in the library simply because it is so quirky, but I cannot bear books being treated cavalierly. So, it has to be the Dylan-themed climax; we have to take what we have gathered from coincidence as the sky folds under us.

Also Read: Get ‘First Day First Show’, our weekly newsletter from the world of cinema, in your inbox. You can subscribe for free here

The time is out of joint in Gunpowder Milkshake, and there is no need to curse spite for it. The film seems to happen out of time and place, the flip-phones notwithstanding. Bathed in neon in a permanent night, gothic buildings and grand staircases jostle for space with diners and giant porcelain molars. Israeli director Navot Papushado has gone in for a Quentin Tarantino-vibe with extreme violence in slo-mo, set to jukebox favourites.

Sam (Karen Gillan) remembers waiting for her mum, Scarlet (Lena Headey), also an assassin, at a diner 15 years ago. A job goes bad and Scarlet abandons her daughter. Sam is now a super assassin working for a shadowy organisation known as The Firm. Head of HR, Nathan (Paul Giamatti), gives Sam her next assignment: killing a man who has stolen from The Firm and getting the money back.

Sam stocks up at an armory, a library run by a sisterhood of assassins, including Madeleine (Carla Gugino), Florence (Michelle Yeoh) and Anna May (Angela Bassett). The women hand her Jane Austen’s Pride and Prejudice, Charlotte Brontë’s Jane Eyre and Virginia Woolf’s A Room of One’s Own, with guns in them while also giving Sam an Agatha Christie (could not see which one) “for reading.”

Sam shoots the embezzler just as the phone rings, and Sam realises the man stole the money to ransom his kidnapped daughter, eight-year-old Emily (Chloe Coleman). On an earlier job, Sam had accidentally killed the son of a powerful mob boss, Jim McAlester (Ralph Ineson) who wants revenge. When Nathan realises he has a war on his hands, and also that Sam has gone off script by deciding to deal with the kidnappers, he gives Sam’s location to McAlester. Thugs led by McAlester’s nephew, Virgil, (Adam Nagaitis) are hot on the heels of Sam and Emily.

All manner of merry mayhem follows, including the aforementioned time with Dr Ricky (Michael Smiley) and the laughing gas. The script is rather slight and reminds one of many, many movies featuring shadowy firms and an assassin’s code. The women have fun with Yeoh holding off on the mystical pronouncements, while Headey has swapped the red Lannister locks for a more regular mumsy look. This is a movie that would appeal to a very specific demographic. You could give it a miss if you are lactose-intolerant though.