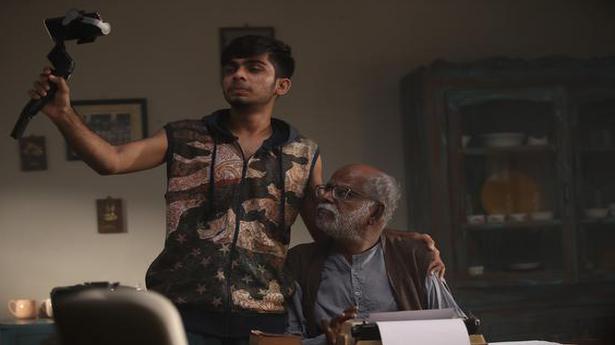 Despite the avoidable flab, director Rojin Thomas’ film stands on the strength of its performances, especially that of Indrans

Changing with the times is not something which comes naturally to everyone. Oliver Twist (Indrans), the protagonist of #Home, is someone who has gone through that struggle more than once in his life. In a short flashback, the script tells us how he once used to run one of the most sought-after video cassette lending libraries in town. The era of video cassettes passed, and he was left behind, longingly looking at the old cassettes stacked up in his attic.

In the present day, Oliver finds an almost unbridgeable gap between him and his sons, who are lost in their smartphones and drowned in social media, a world which is alien to him, as it is for many of his generation. Yet, the gap is more than one of technology. He yearns especially for the approval and care of his elder son Antony (Sreenath Bhasi), a writer-director caught in a rut after his successful debut film. Oliver’s wife Kuttiyamma (Manju Pillai) seems to understand the inner workings of his mind, but there is only so much she can do, while getting caught in her own daily struggles in the household.

Rojin Thomas, who had a promising directorial debut with Philips and the Monkey Pen, and had a forgettable second film, seems to have recaptured some of the magic of his debut in #Home. More than a part of that magic is owing to the presence of Indrans, who has delivered a nuanced, heartfelt performance. From the scenes depicting his struggles with the smartphone — portraying effectively an entire generation’s struggles with technology which came late into their lives — to the ones of him hiding his feelings from the eyes of his family, Indrans makes Oliver relatable and endearing. Even without the ‘extraordinary’ back story. Oliver is made extraordinary by Indrans’ portrayal of the ordinary man.

The mood is kept light all through, with even the emotional scenes getting that treatment, with Oliver’s friend Suryan (Johny Antony) and younger son Charles (Naslan.K.Gafoor) injecting some dose of humour. Where the film falters a little is in trying to say too many things, from mental health to smartphone addiction, which contributes to the runtime of 160 minutes. Some more work at the editing table would have made it a much better film than it is currently.

Not to forget the fact that the script says the same things about the nature of Oliver and his son’s relationship in different ways, though it works at times in capturing the ever-changing shades of that relationship. The script also treats the relationship between Antony and his girlfriend Priya, which is toxic both ways, as somewhat normal.

Despite the avoidable flab, #Home is a relatable, light-hearted tale that stands on the strength of its performances.