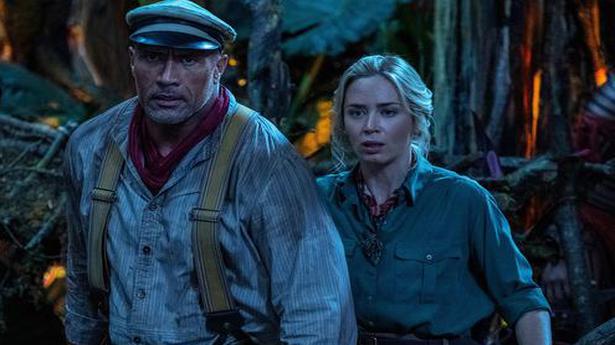 Dwayne Johnson and Emily Blunt are both good value in a fun, entertaining ride packed with monsters, magic and awful puns

There is nothing you have not seen before in Jungle Cruise; the excellent post-production notwithstanding, and the 3D is beautifully rendered indeed. Apart from recalling The Pirates of the Caribbean movies — considering Jungle Cruise is yet another adaptation of a theme park ride — there are bits of the Indiana Jones movies, The Mummy, and The African Queen.

That is not to say the movie is boring. It is good fun, an entertaining ride packed with monsters, magic and awful puns. Dwayne Johnson, as the steamboat captain Frank, makes terrible jokes and his chemistry with trouser-wearing botanist Lily (Emily Blunt) while not sizzling, is good natured and family-friendly. And he also has the sweetest jaguar for a pet.

In 1556, when Aguirre (Édgar Ramírez) led the conquistadors to the Amazon in search of a magical tree, Tears of the Moon, whose flowers would heal his daughter, the jungle proved too much for them and they end up being cursed to eternal life. The jungle turns them into walking beehives, trees and poison frog mud.

Cut to 1916, the Royal Society dismisses Lily’s research on the Tears of the Moon. Lily decides to head for the Amazon with her brother, MacGregor (Jack Whitehall) to find the flower and aid the British war effort.

There is also an unhinged German prince, Joachim (Jesse Plemons) who is searching for the flower. Lily and MacGregor reach Brazil and after a few adventures involving Frank’s rival — the harbour master Nilo (Paul Giamatti) and his cockatoo Rosita — hire Frank to take them to Lágrimas de Cristal where the tree is supposed to be.

Hot on their heels, in a U-boat no less, is Joachim, who decides to take the help of the undead conquistadors. After the obligatory encounters with Devil Throat-style waterfalls and head-hunters led by trader Sam (Veronica Falcón), and a race against time, our intrepid adventurers get to the tree. Frank reveals a secret about himself, MacGregor toughens up and Lily tries her hand at Frank-style humour.

While Johnson is too brawny to play the Indiana Jones-style adventurer, he is good-humoured and gamely rolls his eyes and muscles. MacGregor’s interests lying “elsewhere” is yet another Disney half-stab at inclusivity. Blunt’s Lily follows in the long tradition of bookish ladies from Katharine Hepburn’s Rose in The African Queen to Rachel Weisz’s Evie in The Mummy. She, however, is an expert at picking locks which she learned from the urchins in Delhi and throws a mean punch.

All turns out right in the end, but what happened to Proxima, the jaguar? Maybe the sequel will tell us.