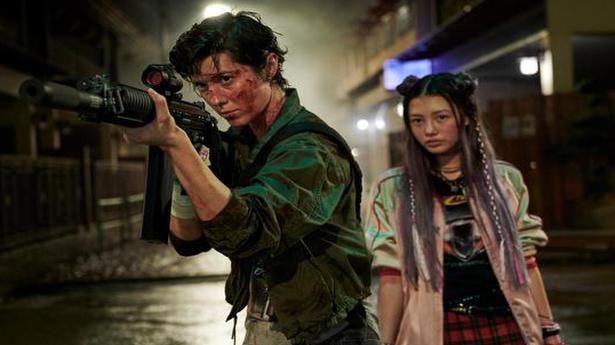 The Netflix flick tries hard to compensate for its outdated storyline with slick visuals and a talented cast, but struggles to leave a lasting impact

A highly trained assassin/lone-wolf has a trusted mentor. She journeys with an ardent thirst for vengeance, but a swivel from the initial plot reveals an Et tu, Brute? moment. Sounds like most action-thriller made these days, doesn’t it?

Kate, currently streaming on Netflix, assembles together both established and promising talents, to deliver a predictable tale, with a twist or two, to the best of its ability.

Kate (Mary Elizabeth Winstead), is a scarred soul with a childhood substituted by fierce and murderous training, that leaves her moving from post to pillar, hunting the lives of Japan’s underworld lords. Her mentor Varrick (the ever-amazing Woody Harrelson) plays the role of family, friend and confidant; the Alfred to Kate’s Batman. The two find out that Kate, after a drunken encounter with a stranger, is poisoned with a substance that has no antidote… leaving her with a single day to avenge her impending death.

The film is set in the backdrop of a gloomy Japan with filthy alleyways, crowded skyscrapers, shabby markets, stark economic disparity and shady written all over it. Though the country is also known for its culture, heritage and food, very little is seen in the film. No doubt the ashen visuals benefit the plot’s morbidity, but director Cedric Nicolas-Troyan and writer Umair Aleem’s deliberate efforts in adhering to these Japanese pop-culture stereotypes by making excessive use of neon lights, and overtly building on the idea of a futuristic setting with dispensable technology, could have been avoided.

A little before the outset of the actual plot, Kate is assigned a kill, which is also the only time one gets to see daylight in the film, as the larger chunk of it occurs over the span of one fateful night. The target is accompanied by his teenage daughter Ani-chan (Miku Patricia Martineau), which gives rise to an ethical quandary in Kate’s conscience: can she shoot someone in the presence of a minor? However, the dispassionate orders she receives are clear and she takes a shot, terminating the target with two strikes. While a fictitious snipper often avoids taking two shots to make a kill (in obvious fear of being spotted), Kate is seen doing just the opposite multiple times. Well, in the film’s defence, logic is really not its strong suit.

Composed by Nathan Barr, the film’s soundtrack is a delightful platter of Japanese pop, rock and Denpa that one often encounters in anime. It plays a vital role in creating an aura around the protagonist and her endeavours throughout the film. But while the music blends effortlessly with Kate’s combat sequences, it does not elevate the thrill quotient, purely due to Kate not facing fights that are challenging enough to create a mass appeal for the character.

Mary Elizabeth is seen giving it her all and more, but the character’s storyline and development, or a lack thereof, was short in chutzpah that would have made a world of difference. By the end of the film, one might even feel sorry for the actor being denied the responsibility that we know she can shoulder.

Probably the most dissatisfying disconnect in the film is the relationship between Kate and Ani-chan, and the poor attempt at establishing it. From hating Kate, to trusting her, and once again predictably detesting the assassin for killing her father, to fighting alongside her is a classic case of too much and too soon. When looked at individually, Miku Martineau plays Ani with complete honesty and with a character arc deep enough to stir empathy for her. But the projection of her mommy issues onto Kate is unclear as the idea is abandoned somewhere in the film, ignoring another potential connection between the two.

Additionally, Woody Harrelson is given insufficient screen-time despite his spectacular persona and ability to do justice to his role.

The movie incorporates the age-old hospital escape scene, the female assassin freeing herself from long tresses to don a stereotypical bob, and a car chase that ends badly — all of which makes one question why there was no attempt to re-do the outdated depiction of this genre.

The idea of an assassin avenging her death even before it takes place and the setting not being the west (for once), is interesting. However, in such a crowded genre, Kate struggles to leave a lasting impact in the minds of the audience.

Kate is currently streaming on Netflix