HomeEntertenment‘Kodiyil Oruvan’ movie review: A silly drama that neither gets its ‘mass’...
Entertenment

‘Kodiyil Oruvan’ movie review: A silly drama that neither gets its ‘mass’ right nor its politics 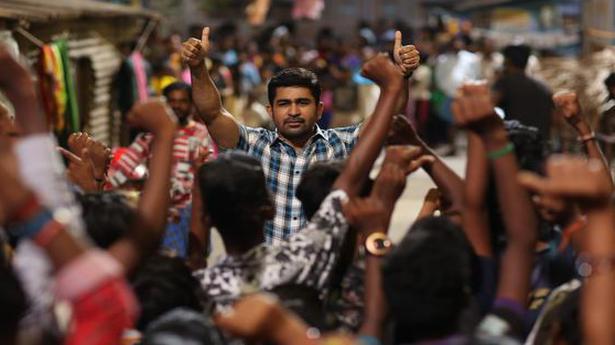 The Vijay Antony-starrer is loud, mostly boring and has a soft-spoken, kind-hearted hero at the centre, who seemed to have been written not on a white paper, but on tile

I would like to draw all your attention towards what could be one of the fantastically-put together hero introduction songs in the recent past. I only ask for 20 seconds of your time.

In under 10 minutes in Kodiyil Oruvan, we get a song about the hero with snapshots from his everyday life, that not just spells out for the audience what a gold-hearted and diamond-footed hero Tamil cinema has never seen (duh!), but screams it instead. In Nee Kaanum Kanave, we get a glimpse — and literally so — of Vijaya Raghavan (Vijay Antony), as he goes about his everyday chores on a bicycle. Now the obvious, natural and instinctive question that may arise in your mind is, what’s so markedly different about this song in particular… don’t most of Tamil cinema’s mass narratives have these? The answer is a resounding NO.

Because, in those films, the hero’s good deeds would have mostly been related to the background or we get to hear about his sainthood-ness through lyrics, if you pay attention that is. But in Kodiyil Oruvan, we seemed to have finally found the answer to why Tamil cinema’s mass heroes are good-hearted and diamond-footed.

Picture this: in the said song, Vijaya Raghavan carries an elderly woman when he finds her unable to walk; he delivers medicines and groceries to the needy, takes care of his mother, does swimming, serves as part-time teacher to children, can be seen occasionally practising boxing and also seem to help woodcutters. He also rides a bicycle. Oh, wait! We seemed to have discussed that in the previous paragraph. Given the myriad roles he dons, I half-expected Vijaya Raghavan to break into an impromptu tap dance, while tossing the pan preparing a schezwan curry. And I am positively sure that I missed at least two of the roles in his everyday chores.

From this peculiar, yet very real description of the song, you, the reader, should have now figured out the kind of film Kodiyil Oruvan is.

It is the latest entry in Tamil cinema’s never-ending list of crowd pleasers, which isn’t an issue. But how do you invent something new out of a tried-and-tested-and-dead formula is the question. It is a film that milks paneer out of the amma sentiment, but remains true to the conventions of Kodambakkam-ness.

Like, for instance, it is Vijaya Raghavan’s first day of college in a new city. He sits on a desk that miraculously has amma scribbled on it. What does he do next? Gets emotionally-attached and we are left to wonder if the director thinks of us as fools. The ‘goodness’ of this scene sets precedent for a loud, boring, preposterous film that follows.

Director Ananda Krishnan made a brilliant debut with Metro, which, for the most parts, had everything put together in an orderly manner. In Kodiyil Oruvan, he goes bombastic with WhatsApp forwards as approach to screenplay writing.

Take this: Vijaya Raghavan lives in a housing board in Chennai. When he finds a boy peeing outside his house, he does something spectacular: he gives the boy a seed and asks him to plant it there. The next day, the boy comes to take a leak but decides to hold it instead, when he sees the sprout. This is what happens when you take ‘sowing the seeds’ in literal sense.

I wonder why Vijaya Raghavan didn’t lecture from J Krishnamurti’s book, when a politician gives him trouble. I mean, he could have planted a few thoughts and we all could have gone home happily.