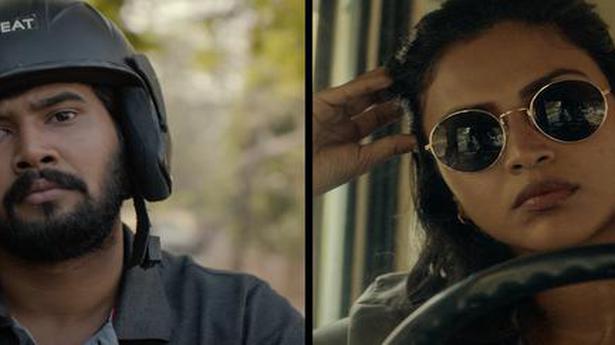 Imagine waking up to realise that you have already lived through this day. You are aware of the perils that lie ahead and try your best to change the turn of events, only to fail. And the day repeats, yet again. Director Pawan Kumar, whose Kannada films Lucia and U-Turn earned him a loyal following, takes up this story written by Ram Vignesh for the Telugu web series Kudi Yedamaithe, streaming on Aha. Caught in this time loop are the protagonists, played by Amala Paul and Rahul Vijay, both battling their inner demons and racing against time.

Kudi Yedamaithe (meaning ‘if right becomes left’) owes its title to the song written by Samudrala Raghavacharya and sung by Ghantasala for the 1953 Telugu film Devadasu, starring Akkineni Nageswara Rao. The phrase refers to an unexpected turn of events throwing life out of gear.

The series spans eight episodes, each with a duration of 30-35 minutes, and stays focussed on its plot, without giving in to any frills. The story gradually reveals its cards, delineating the web of sub plots and how the two protagonists struggle to rise above events from the past that haunt them.

Adi (Rahul Vijay) is an aspiring actor who works as a food delivery agent for an agency aptly named ‘repEAT’. It could be just another day in his life — a rushed breakfast at a neighbourhood food stall before he takes delivery orders and navigates the city, and later in the day gives an audition for a film role. A casual conversation over a meal at his workplace gives us an idea of the bond he shares with Farooq, an older colleague who cares for him.

In the meantime, cop Durga (Amala Paul) who struggles to shake off her dependency on alcohol, tries to focus on the tasks for the day. There’s a seemingly dead-end case and other challenging ones that need to be dealt with. As the clock strikes 12, both Adi and Durga meet with an accident, and wake up the following morning, only to relive the day all over again.

Can they break free of the loop? Can they undo the tragic events that happened earlier, now that they are aware of what the rest of the day holds?

Kudi Yedamaithe builds on the interesting premise and gathers momentum from the third episode, as Adi and Durga discover more about the victims of crime and how those events in turn affect their lives.

The beauty of the series lies in the little details — the repetitive events in the time loop are shown with subtle variations to stress the change in the approach of the two characters. Watch how Adi goes through the same audition each time on the loop. At first, he approaches it with nervousness, then with the confidence of having been through the drill earlier, and later with disdain because something else becomes a priority, and so on. Likewise, Durga’s strategy for the day keeps changing as she desperately tries to prevent a crime. As Adi and Durga’s sense of purpose and urgency rises, they keep us riveted in trying to turn around devastating events.

The time loop is central to the plot, and Pawan Kumar and his technical team ensure a slick thriller where the repetitive events never get boring. Amala Paul is expectedly sure-footed in her portrayal of Durga, with all her complexities; the surprise is Rahul Vijay, who gets an equal footing and shows that he has potential.

Kudi Yedamaithe isn’t done yet. It ends with an intriguing note, eager to explore more in the next season.