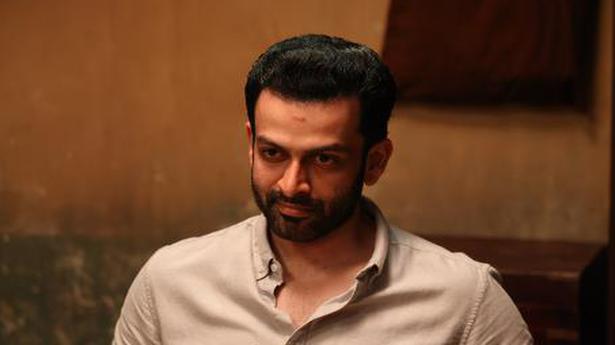 The Prithviraj-starrer’s promising premise does not exactly translate into exciting cinema, with over-dramatic and preachy lines spoiling the effect

Not so long ago, people who used to proudly display their religious bigotry used to be referred to as ‘fringe elements’. Slowly, that usage almost ceased to exist as hate speech got mainstreamed through vast social media and ground networks, so much so, that not even the remotest regions remained immune from it.

In Kuruthi, the action takes place in one such remote region, inside the hilly forests, which is recovering from the after-effects of a landslide. When we see the families here first, most of them are still grieving the deep personal losses. There is not a clue about the communal cauldron simmering beneath, not especially in a woman who is spending much of her waking hours in taking care of the affairs of her neighbour, who belongs to another religion.

The film, written by Aneesh Pallyal and directed by Manu Warrier, seems to say that it might not take much to kindle a fire from the inherent biases and baser instincts in humans, especially when political actors of various hues are waiting to gain from it. Following the genre of ‘home invasion’ films, here we have a police officer (Murali Gopy) barging in one night along with an accused in a religious hate crime into the household of Ibru (Roshan Mathew), who is grieving the loss of his wife and daughter in the landslide.

Before long, a band of extremists of the opposite hue lands up at the doorstep, baying for the accused’s blood, setting up a clash of religious ideologies, in which even the most sane ones sometimes display their dark sides. Moosa (Mamukkoya) and Laiq (Prithviraj) represent varied ways of looking at the same religion, while on the other side there are the accused’s and Manikandan’s characters.

Yet, this promising premise does not exactly translate into exciting cinema, with over-dramatic and, at times preachy, lines spoiling the effect. One gets a staged feeling in some of the sequences, which is compounded by the fact that much of the action takes place inside a room. Saddled with the unenviable task of striking a balance between the extremism of both sides, and distributing the blame equally, the scriptwriter must have broken more sweat than the cinematographer.

At times, the balance seems to be forced and simplistic, and at some points the crimes of one side seems to be downplayed and explained away as the doings of an impressionable youth. In fact, we are never shown any images of the murder that he committed, but we get to see a lot of the violence those hunting for him are committing. Several layers are set up for exploration, on how religion colours interactions between humans, but these are either left under-explored or are delivered as unconvincing one-liners amid the bouts of violence.

The makers of Kuruthi might have been well-intentioned, but the intent somehow gets lost in the treatment and the forced balancing.