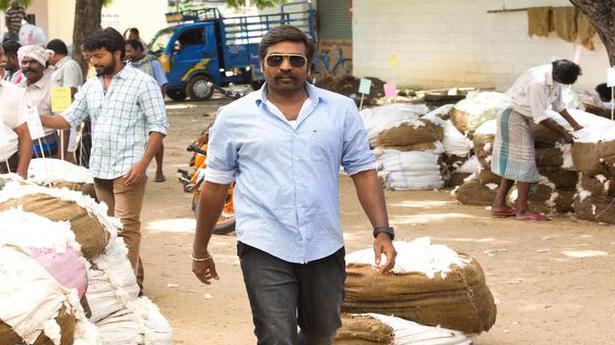 “Agriculture won’t die. I’ve come to do agriculture.” Pakiri (Vijay Sethupathi) says this with quite some conviction as he enters Peruvayal, a village he left a few years ago to embark on a world tour.

Pakiri looks like a fakir, dishevelled and unkempt, but he’s still supposed to be a hero in commercial Tamil cinema. And so, within a few minutes of seeing him on the big screen, we see him engaging in a pointlessly-elaborate fight sequence and impromptu dance track.

Did we just say ‘pointless’? Oh no, we’re just about to be bombarded with tonnes of points, throughout this 2 hour 39 minute social studies lecture against the perils of capitalism. Packed with so many statistics as well, a factor that might probably please director AR Murugadoss (remember Ramana?).

Laabam is essentially Vijay Sethupathi championing the cause of agriculture – more specifically, collective farming practices – but that requires a villain, and he comes in the form of Vanagamudi (Jagapathi Babu). He wants to be in-charge of the local farmers’ association and control farming practices and costs, but he has to come face-to-face with Pakiri, positioned as a peoples’ leader, to do that. Will he succeed?

The intention behind the film is noble no doubt (the brainchild of late director SP Jhananathan, the man behind films like Iyarkai and E) but the writing is as barren as the farms shown in it, those that haven’t seen a hint of green in the last few decades. Case in point: Pakiri and team find it tough convincing the villagers of their grand plan, and so rope in a dancer called Clara (Shruti Haasan) to help them out, and the sequences that follow are ludicrous.

In the second half, Laabam gets a slightly different texture, with Pakiri ditching his home ground and getting on the run. You think something is brewing, but soon the all-too-familiar corporate greed versus farming practices angle creeps up, and we’re subjected to long lectures on sugar production, cotton sales and fair farming practices.

And what’s Vijay Sethupathi doing in the middle of all this, riding around a Bullet that has the registration number, TMX 4777, the same as matinee idol MGR’s Ambassador car?

Laabam is more a visual representation of a protagonist in a television programme (Namma Ooru Hero, which celebrates everyday heroes in different fields) than a film.

Laabam is currently running in theatres