HomeEntertenment‘Maestro’ movie review: This ‘Andhadhun’ remake is sincere and ambitious, but is...
Entertenment

‘Maestro’ movie review: This ‘Andhadhun’ remake is sincere and ambitious, but is that enough? 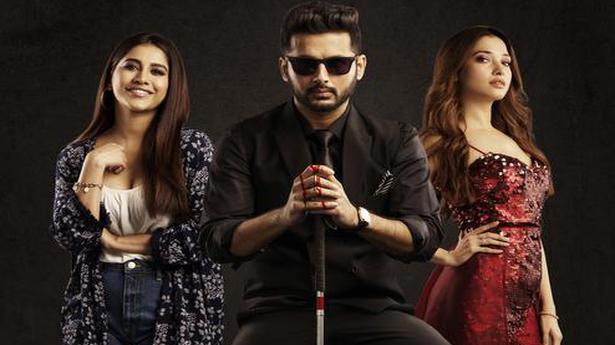 Nithiin scores in the ‘Andhadhun’ Telugu remake, which leaves no room for ambiguity in the end

Director Merlapaka Gandhi and actor Nithiin, whose home production has backed Maestro, deserve a pat on the back for trying to recreate writer-director Sriram Raghavan’s brilliant black comedy Andhadhun, in Telugu. If you’ve seen the original, you might agree that it takes guts to even attempt to match that vision.

One could argue that when the original is available to view digitally, do we need a remake that takes a direct-to-digital route (Disney+ Hotstar)? But for the business constraints during the pandemic, Maestro would have been a theatrical release, taking the story to newer pockets of Telugu film viewers. That’s a different issue altogether.

As it stands, Maestro is faithful to its source material, tweaking it only mildly. Yet, it falls short. Remember the macabre humour that unfolds as the pianist, supposedly blind, is privy to events that unfold in a yesteryear actor’s house after a murder? A lot depended on how the sequence was choreographed, with the inimitable Tabu playing a big part, helped by Ayushmann Khurrana and Manav Vij. The sequence in Maestro follows a similar pattern but the effect is far from the same.

Maestro is set in Goa where pianist Arun (Nithiin) tries to create music with the utmost focus, play-acting to be blind to avoid distractions. He falls in love with Sophie (Nabha Natesh), whose father runs a restaurant. Arun hopes that his music can help reverse the fortunes of the restaurant. Here, he meets yesteryear actor Mohan (V K Naresh). An invitation to play at a private concert in Mohan’s residence changes everything for Arun.

The moral compass stays skewed for most of the characters, be it Arun, Simran, Bobby or later the organ-harvesting doctor (Harshavardhan), lottery ticket seller (Mangli) and the auto driver Murali (Racha Ravi). The one who is most unapologetic about her deeds, driven only by a survival instinct, is Simran.

Nithiin seems to have enjoyed being part of a story that stands out from mainstream Telugu films, and Nabha is at ease playing the girlfriend. It isn’t a complicated part and she does well. It is appreciable that Tamannaah has dubbed herself, but her laboured Telugu diction doesn’t cut it. Alas, she is no Tabu.

The biggest tweak from the original comes at the fag end. Andhadhun’s end sparked off many theories. Sriram Raghavan had stated that the intention was to leave it open to interpretation. Merlapaka Gandhi, though, leaves no room for ambiguity.

For those who have watched Andhadhun, Maestro might be a tad underwhelming. For others, there might be something to chew on, given that Telugu cinema doesn’t explore such stories often. The larger issue, however, is about remakes. In recent years, Uma Maheswara Ugra Roopasya and Evaru stood out by cleverly reinterpreting the original stories. Most other frame-to-frame remakes seem needless in the digital era when original titles are easily available for viewing.