‘Money Heist’ Part 5 Vol 1 review: A dizzying, heart-pumping celebration of The Professor and his crew 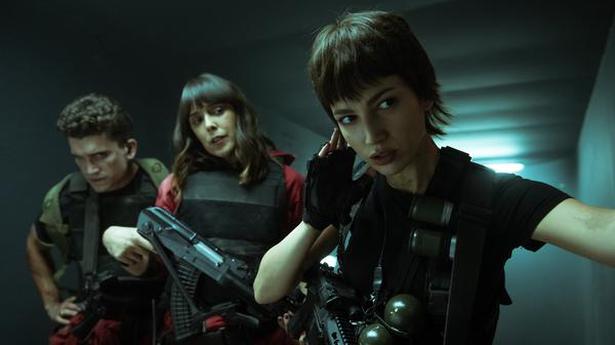 The first half of the fifth part of ‘Money Heist’ or ‘La Casa De Papel’ has finally landed, offering a mould-breaking mix of betrayals, battle sequences, plot twists and so much more

At 12.30 pm IST on September 3, it seemed like everyone was frantically refreshing their Netflix web page or app seeking out a slate with the iconic red jumpsuit and the Salvador Dali mask, marking the arrival of the new and final season of La Casa De Papel, aka Money Heist.

The fourth part of the crime-drama series left us at a frustrating cliff-hanger – which seems to be an unrelenting habit of Money Heist’s writers. Former inspector Alicia Sierra (Najwa Nimri) infiltrated The Professor’s (Álvaro Morte) hideout and had him at gunpoint. Meanwhile, armed forces are at the ready to storm the Royal Mint of Spain.

Leading into part five, Sierra has all the odds in her favour as she plays a dangerous game of either using the Professor as a mouthpiece to control his crew or just dangling him from a chain over sewage water. Meanwhile, in the bank, a seething Arturo (Enrique Arce) plans to take on Denver (Jaime Lorente) and Stockholm (Esther Acebo) with a violent coup. Outside, the aggravating Colonel Luis Tamayo (Fernando Cayo) takes over as the picture of bureaucracy, only too happy to go any which way to make himself look good.

As the ante is upped for the fifth part, the actors and creator Álex Pina make sure to meet the new challenges ahead of them.

Sierra, who had been removed from her position as part four wrapped up, is beyond unhinged and Nimri makes a decent clenched fist of her role as the unsympathetic and vengeful cop. Sierra has been one of my favourite new characters in parts three and four, as she embraces a now-coarser approach to making the Professor’s life difficult.

Corbero continues to give us more Tokyo in which to relish. While we all adore Tokyo for her trademark cool rage, we grow to love Silene (her real name) as more of her backstory is revealed. Dwelling on these scenes may either frustrate or calm audiences, but they add a welcome dimension to Tokyo. The fact that a whole episode was dedicated to Tokyo’s past had me unsettled because we know full well what that means in the world of TV. Tokyo is still a badass, as we see her take on the sadistic Gandia (José Manuel Poga) who had killed Nairobi (Alba Flores); her revenge on him had me smiling through some very bleary tears.

The Professor’s yin-yang nature of self-control – most notable when Sierra shoots him in the foot and he reacts with no more than flinch – and quiet aggression has made him one of the most incredible people on television. Everything about his personality makes him geared for success. While The Professor aims to personify control, Morte also embodies an intriguing struggle between playing protector and plan executor.

One of the most meaningful arcs in the series has been that of trans-woman Julia (Belén Cuesta); her journey from a young boy in a small town to reconnecting with her formerly-unaccepting father. Julia does whatever she can to protect the people she loves, be it calming Denver down during an attack or telling Stockholm what it means to be a loving parent. While Tokyo is the unreliable narrator of the series, Julia is the voice of love and reason; she makes it work in even the most hostile of moments without seeming forced.

For a long time, I could not stand Stockholm. She started off as a bumbling mistress to Arturo who seemed to live up to her city name as she fell for Denver and became part of the crew. I could not see anything beyond her initial circumstances. But the fifth part of Money Heist dives deep into Stockholm’s emotional challenges as a new mother who has to protect her crew from the father of her child. Her battles against Arturo leave her with a troubled conscience and plenty of PTSD, and Esther Acebo pushes the envelope here to make sure Stockholm leaves her mark on audiences.

Read More | Pedro Alonso on Berlin from ‘Money Heist’: ‘He has no rules or limits’

The fifth part slaloms between the heist settings and the terminally-ill and newly-wed Berlin (Pedro Alonso) recruiting his son Rafael (Patrick Criado) who is a cybersecurity expert. The 31-year-old MIT alum is roped into his father’s life of crime unwillingly and he proves a formidable opponent to Berlin in some circumstances but audiences can tell Rafael craves his father’s love and approval. While this may seem cosy, the Berlin we all know still shines through his sociopathic tendencies.

The fifth part of Money Heist lives up to the urgency through the fight sequences which are fun-to-watch combos of Krav Maga and street-style fighting. The series, from start to finish, spared no expense on these artful fight scenes and they are so convincing, audiences may feel some vicarious pain for their beloved bank robbers.

Across five episodes, Pina directs the fifth part with the unhurried air of a filmmaker who wants to waste no time on embellishments that have no connection to the core of the series. The central relationships in Money Heist are far from schematic, exploring platonic friendships, unrequited love, former romances and hard-bitten break-ups with ease. Pina is a fine example of a director and producer who makes full use of the talent at his disposal and makes sure every scene – however micro it may feel – counts; be it army leader Sagasta (José Manuel Seda) who makes Gandia look like a puppy, the charismatic Palermo (Rodrigo de la Serna) still being absolutely off his rocker, or the sweetness of Rio (Miguel Herrán).

Rarely have there been such shows where almost every character leaves a mark on the audience, and Money Heist does this in spades. Part 5 Volume 1 will have you glued to your screen with your heart in your throat, feeling extremely unsettled as you wait until December 5 for the second volume which will round up the series. If you, like me, watched Volume 1 in a single sitting, chances are you’re watching it over again while yelling, “For Nairobi!”