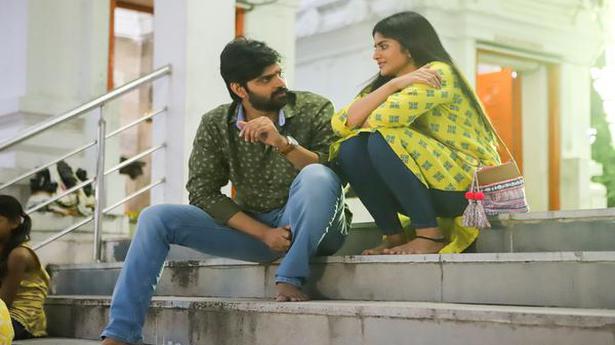 The smartness in Raja Raja Chora, in which the protagonist plays a small-time thief, does not lie in his modus operandi. Writer and debut director Hasith Goli turns the tables to show the criss-crossing of a morally ambiguous set of people and the precarious situations they find themselves in. The result is a quirky comedy with laugh aloud segments and an emotional tale of punishment and redemption.

At first impression, Raja Raja Chora’s milieu seems like a spin off of the ‘Brochevarevarura cinematic universe’. Hasith worked with director Vivek Athreya before writing and directing this film. The familiarity also arises from the presence of a few actors and crew members from Brochevarevarura in this film.

The story introduces us to characters we are likely to come across in the city, but may not pause to take a closer look. Bhaskar (Sree Vishnu) is a thief by night and works at a photocopy centre by the day, is unhappy with his marriage to law student Vidya (Sunaina) and pretends to be a software engineer to date Sanjana (Megha Akash). What’s common between the three is the aspiration for a better life — well-paying jobs that give them better dignity, and a roof of their own.

Slowly, we understand why Bhaskar resorts to thieving and the shaky terrain on which his marriage is built. But thankfully, the story doesn’t justify his actions. It lets the grey shades define him.

Hasith explores the moral compass through a multitude of characters. If Bhaskar is on the wrong side of the law, who punishes him and what is their moral standing?

The film shifts to top gear when Bhaskar crosses paths with police officer William Reddy (Ravi Babu). The pre-interval segment plays on for a good 20 to 30 minutes like a comedy of errors that exposes the flaws of a bunch of characters. Accelerating the fun is Anjamma (Gangavva) who prods Bhaskar to commit a crime dressed like a king — because she believes the crown has a destiny-defining significance.

The crescendo of fun gets expectedly tempered by Vidya’s emotional travail that shows Bhaskar his true place. He might be dressed like a king, but it’s she who is in the driver’s seat of their married life, doing the heavy lifting.

While a chunk of the story revolves around Bhaskar, Vidya and Sanjana, a number of other characters have well-defined arcs and their journeys contribute to the larger story. Ajay Ghosh as the photocopy store owner and Gangavva become catalysts to Bhaskar looking to redeem himself. Ravi Babu who looks to make the thief a scapegoat, and Srikanth Iyengar as the doctor who is keener on the lucrative real estate business are among the morally corrupt characters.

Sree Vishnu is effortless as the man next door and is convincing in the comic and the emotional sequences where he wants to turn a new leaf. Sunaina and Megha Akash get well-written characters with ample room to assert themselves and they do justice to it.

Giving this story added gravitas is its timeline, from Mahashivaratri to Rama Navami, which becomes a tool to use the story of Valmiki for redemption and the beginning of a new journey. Tanikella Bharani makes a brief appearance as the priest.

With Raja Raja Chora, Hasith Goli joins the list of directors to watch out for in Telugu cinema.