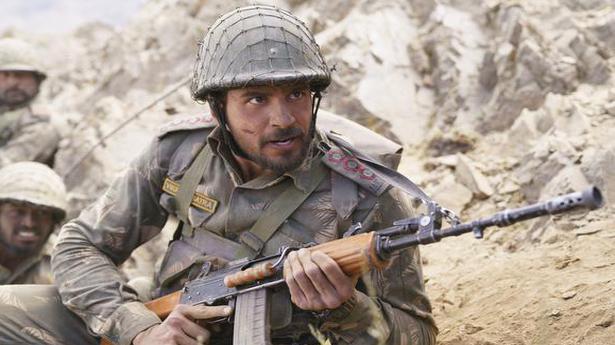 A biopic on the Kargil War hero Captain Vikram Batra, ‘Shershaah’ is not entirely a bad film but is plagued by the ordinariness of the war films we have been accustomed to

About an hour into Shershaah, we get a scene carved out of the screenplay book of every Indian film. Or rather, every film that wants to extract tears in whichever way possible. It goes like this: Vikram Batra (Sidharth Malhotra) and his comrade Bansi (Anil Charanjeett) are on night patrol in Jammu and Kashmir, where they are posted on the sidelines of a brewing war with Pakistan, and the duo has a heart-to-heart conversation. Bansi shows a picture of his daughter, Durga, and says that he will carry her in his arms for the first time, when he goes home post-war. Affected by Bansi’s choice of words, Batra melts and promises to open an FD in his daughter’s name, to secure a future for her.

If you are an average cinema viewer, you sense from a mile that it is a cue to finish off the character. What truly takes you by surprise is, it does not happen in the aforementioned scene but three minutes later. It is also the sort of death that would change the belief system of the hero, Vikram Batra. For instance, he says to his fellow officer Captain Sanjeev Jamwal (Shiv Pandit), that nobody will ever die on his watch, when he becomes a commanding officer. “The bullet had my name,” he remarks, about the bullet Bansi takes for him.

Now whether this incident is real or not, or whether it affected Batra to sacrifice his life to protect his team, is beside the point. The manner in which Shershaah’s screenplay is designed, looking too constructed to be true could be argued as the more affecting death of the two.

Another scene that reeks of familiarity is when Batra goes to meet Dimple (Kiara Advani) unannounced. Before he leaves for the war again, she asks him to come back for her. There is sadness in her eyes and uncertainty in voice. Batra cuts his finger and puts a tilak on her forehead, signalling a unification of hearts. It is too flimsy and sugary to be Bollywood and it isn’t a surprise that the line: ‘soldiers live by chance, love by choice and kill by profession’ is apparently Batra’s. But you get the drift…you know the eventuality.

Mind you, all of which is not to suggest that Shershaah is a bad film. It is well-made and could have been a recommendable watch. There is a vision in cinematography (Kamaljeet Negi), earnestness in direction (Vishnu Vardhan) and flavour in music (Tanishk Bagchi, B Praak, Jaani, Jasleen Royal, Javed-Mohsin and Vikram Montrose). The issue is not with the execution but with the writing. It is bathed in the same familiarity as the other Indian war films, with Lakshya and Uri: The Surgical Strike being obvious exceptions. Shershaah follows a similar structural, narrative arc as last year’s Gunjan Saxena: The Kargil Girl, also released on the Independence Day weekend. Given how both these films are produced by Dharma Productions, I half-expected Jahnvi Kapoor (as Gunjan Saxena) to make a swashbuckling cameo, rescuing men from the operation.

In the opening, we see Captain Vikram Batra and his troops in the middle of action when they are on the way to destroy the last Pakistani bunker that would recapture the peak. It is a flashback, flash forward narrative, like we saw in Gunjan… But unlike Sharan Sharma’s film, which got its rock-solid emotional beats right by exploring the dynamics of a father-daughter, Shershaah looks scattered. There is a childhood episode in Batra’s life which neither has emotional heft nor says anything about him. It acts as a filler, just as the romance with Dimple. But these are a few supposedly “charming” portions you buy Sidharth as Vikram Batra, not in the battlefield.

Narrated by Vikram Batra’s twin brother, Vishal Batra (also played by Sidharth Malhotra), Shershaah makes up for its mishaps in the second half by entering the warzone. Twenty-five-year-old Batra’s heroics during the Kargil War are morphed into hair-raising action pieces and we do get a sense of war, though sporadically. It makes you think how marvellous Uri was, despite it being a really well-made work of propaganda. In that sense, Shershaah is not loud, rather, a ‘soft’ film. But for us to participate, it needed more friction.