‘SR Kalyanamandapam’ movie review: An overdrawn, melodramatic and misogynistic film with a sliver of a story 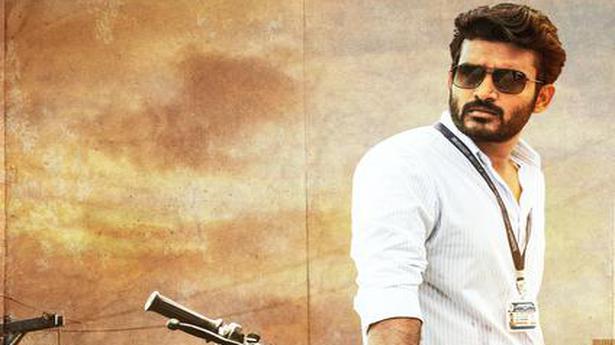 ‘SR Kalyanamandapam’ is overdrawn, melodramatic and misogynistic with a sliver of a story

What SR Kalyanamandapam, with the tagline Est. 1975, needed the most was a sharp pair of scissors at the editing table. It rides on a sliver of a story and packs in a cocktail of segments meant to appeal to the ‘mass’ audience in theatres along with melodramatic scenes of father-son bonding. The 148-minute film is an ordeal.

Kiran Abbavaram made his debut with Raja Vaaru Rani Gaaru (2019), a small-town musical romance that won hearts. In SR Kalyanamandapam, he takes on the responsibilities of story and screenplay. He is promising as an actor; he has a screen presence, can emote well and hold attention. But a film needs to be more than a showreel.

We are introduced to Dharma (Sai Kumar) who has wasted himself over alcohol. His high-pitched exchanges with his wife Shanti (Tulasi) whom he refers to as Sivagami for her fieriness, are a daily fixture. The family’s only reason for pride in the village is S R Kalyanamandapam that was established by Dharma’s father; that is at the risk of being frittered away. It’s no surprise that Dharma’s son Kalyan (Kiran Abbavaram) is tasked with restoring the family’s honour as well as mend his broken bond with his father.

But what strained their relationship? Never mind. Some time into the film and it doesn’t seem to matter. Because there are other problematic tropes — like the hero’s fixation with the heroine’s midriff. The fixation culminates in them watching Kushi (2001). Maybe someone should have told the film’s creative team that it’s 2021 and time to change the narrative.

Misogyny plays out in the way Dharma rebukes his wife, who retaliates with anger and tears, and in the way Kalyan keeps objectifying Sindhu (Priyanka Jawalkar).

In a post-interval scene, Sindhu slaps Kalyan and declares that she has never reciprocated his advances. Finally something about consent! But this happiness is short-lived. In the following scene, she declares her love for him.

Talking of slap, the principal characters keep slapping each other. I counted six. There could be more, I’m not sure.

Once Kalyan and his friends restore the wedding hall to its glory and bring back the concept of intimate, personal weddings, the story seems more or less done. But soon, Sindhu has a new suitor and the film continues for more than an hour, unleashing some more drunken stupors, fights and dances. Oh, there are several scenes all through the film showing the protagonist, his friends, father and many random men often getting drunk.

The cold war between the father and the son also has no gravitas. It just paves way for dialogue-heavy emotional scenes before they patch up.

Even a song by Sid Sriram at the fag end cannot resurrect interest.

The hugely popular Gangavva is a spectator to the happenings at Dharma’s house, and she chuckles away. Then there’s Dharma who often looks for the nearest pillar or wall to bang his head. Both these more or less sum up a viewer’s plight.