HomeEntertenment‘Thalaivii’ movie review: Arvind Swami kills it as MGR in a Jayalalithaa...
Entertenment

‘Thalaivii’ movie review: Arvind Swami kills it as MGR in a Jayalalithaa biopic that has her playing a cameo 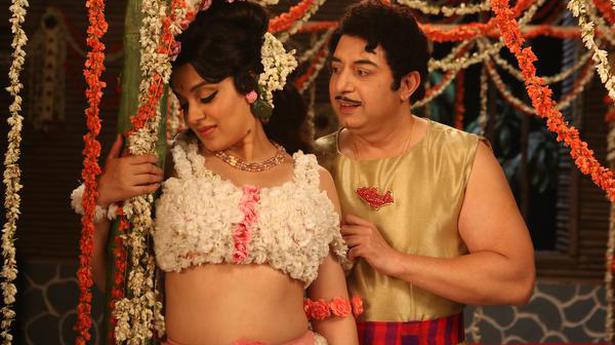 It is odd that 3/4th of the film, which claims to be a biopic on Jayalalithaa, is taken over by men where Jaya is sidelined, which in itself is reflective of her private-public life. It is equally odd that the two most stand- out characters, in a film about Jayalalithaa, are MGR and Karunanidhi, played by Arvind Swami and Nasser respectively

There is a chirpy and equally snarky little moment in Thalaivii where Jaya (Kangana Ranaut. Why) gives a press conference singing praises about Sivaji Ganesan, in order to get back at MG Ramachandran, whose advisers have now shadow banned her from pairing up with the star for obvious political reasons. Jaya, who would later be known for anything but being diplomatic, gives a rather measured response to a question about who the better actor was: Sivaji Ganesan or MGR, an all-too easy question. If you are still wondering, it is Sivaji. At least that seems to be a common perception.

But director Vijay’s Jaya does what can only be described as quintessentially Jayalalithaa. She tells, rather asserts, her manager that it is she who is the better actor and not her male counterparts. This scene lends itself to Jayalalithaa’s personal life, if you purely go by the definition of ‘acting’ wondering if her legacy was the best character she ever played, whether she had been wearing a ‘mask’ all through her personal and political life. You will never truly know who Jayalalithaa was or rather what. She was, to put it simply, an enigma.

Now political observers, who may not necessarily align with her politics or personality, may agree to that. She was, perhaps, ‘acting’ as a puppet in the hands of a puppeteer, to borrow a line from Vaasanthi’s biography Amma: Jayalalithaa’s Journey from Movie Star to Political Queen. The aforementioned scene can also be largely viewed as an extension of Jayalalithaa’s political career in the largely male-dominated political landscape of Tamil Nadu, for, she seemed to have thrived and succeeded in bettering the men. Jayalalithaa’s unbridled grit and perseverance: from the effervescent Ammu to the fearless Amma, is ‘masala-fied’ to pummel an already dramatic life. But more about masala later.

MGR was a personality cult. As was Jayalalithaa. As was MK Karunanidhi. Notice how Jayalalithaa is placed in between the men. That she broke out of the male-dominated political sphere to become a larger-than-life figure, is beside the point. That she was sandwiched between the men, is the larger point. Which is why it is no surprise that almost 3/4th of a biopic that claims to be about Jayalalithaa, has the shadow of a domineering MGR and partymen that dwarfs her individuality from getting a standalone film.

Sure, it can be said that Jayalalithaa’s life should only be seen from the political developments that happened in the State. But that is still one way of looking at it, no? For instance, in Amma…, if my memory serves me right, Vaasanthi states how moderately excited and forthcoming Jayalalithaa was for the book until a question about MGR touched a raw nerve, ultimately resulting in a shadow ban. Thalaivii neither gets the greys right nor the whites, leaving us to wonder if Jaya is Vijay and Vijayendra Prasad’s (writer) figment of imagination; the version they thought she was.

Thalavii opens in 1989 with the infamous Assembly incident that stripped Jayalalithaa of her dignity; which Karunanidhi termed a “black day” in Tamil politics. She swore not to return to the Assembly if not as the Chief Minister. The Panchali sabatham is all part of history and in our distant memory. The film ends with Jayalalithaa’s ascent to power in 1991 and it doesn’t surprise why Vijay chose to commercialise this particular timeline, loaded with heavy dramatic beats, to present to viewers. Therefore, it is only fair to say that Thalaivii is a half-biopic.

The problem with Thalaivii is not exactly the ‘masala-fication’ of a dramatic life in public. It is bending facts with fiction, through hearsay stories or otherwise, about a relationship between two people that was never explicitly defined in public, although everyone knew what it was. By sugarcoating MGR and Jayalalithaa’s relationship as a warming “love” story, the makers leave us with the tough task of guessing the coulds and woulds. Which is also why, when MGR (who, strangely, is referred as MJR in a few places) telephones Jaya to patch things up after a rift in the party, we are left to wonder if this could have happened or should have. You sense the scene is a set-up and like a typical melodrama, it ends with Jaya waiting for MGR’s arrival, only to be informed of his death. There is a moment where Jaya describes her equation with MJR as that of Krishna and Radha. This, perhaps, anyone was planning on a lawsuit. Except but a few cursory references to Adimai Penn, Nam Naadu and Ragasiya Police 115, the film does not bother to capture Tamil cinema from that era.

These are not to say that Thalaivii is utterly unwatchable. You feel remotely invested in it, thanks to Arvind Swami killing it as MGR, which is easily the only positive outcome of this biopic. If you think about it, what Arvind Swami has done is truly astonishing. He treads a dangerous yet fine line between mimicking and not making MGR look like a caricature on screen. He does this by not overselling the theatrics, physicality or voice that the star has become synonymous with. Just notice the way Arvind Swami smiles, exposing those whitened teeth. Notice how he does vanakkam in a hurried fashion, as if to say: “yeah, yeah”. Take a note of how he uses the handkerchief and his controlled hand gestures. Another character that stands out is Karuna, played by Nasser with a raised left eyebrow.

Also Read | Becoming MGR: How Arvind Swami got into shape for ‘Thalaivii’

Kangana Ranaut as Jaya is outrageously miscast. Notice how the camera never truly lingers on Kangana for more than a few seconds, if she has dialogues in Tamil. The editor either cuts to focus Kangana’s expressions or leaves her out altogether. It is also telling that the actor who cannot get one full sentence right in Tamil, has been chosen to play one of the powerful personalities. At least Vivek Oberoi may not feel left out.

There is very little originality and freshness in a story that Tamils know by heart now. Who is driving this story about, perhaps the most important chapter in the history of Tamil politics, needs to be seen. Thalaivii is produced by a Bollywood production company and stars an equally alien actor. It is written by a Telugu writer and made by a Tamil filmmaker who seems content with a ‘safe’ film, perhaps after holding a test screening with all parties involved, to make sure everyone went home happy.

Political observers will tell you why you don’t have to look beyond Tamil Nadu for drama, in what was once a musical chair of power. Thalaivii only proves that nobody can script a drama out of Tamil politics. For, the politics here writes its own.

Thalaivii is currently running in theatres