‘The Chair’ review: A deep dive into academia’s ups and downs, led by a dazzling Sandra Oh 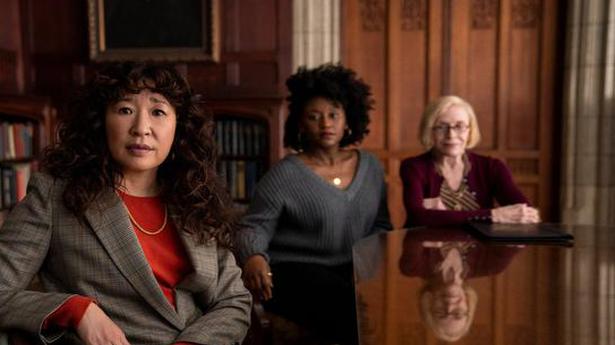 Creators Amanda Peet and Annie Wyman delve deep into several relevant themes and keep the tension palpable in their new show, that is brought alive by the near-perfect ensemble cast

Academia Twitter has been abuzz ever since Netflix dropped its latest offering The Chair. In the run up to the drama-comedy earlier this year, the makers had released an intriguing newspaper clipping announcing Professor Ji-Yoon Kim(Sandra Oh) as the first female and POC Chair at the fictional Pembroke University’s English department.

Ji-Yoon doesn’t just inherit a department with a 179-year history, but a crumbling one that is in dire need of some changes. The threat of budget cuts looms large, some senior staff members haven’t updated their syllabi in decades, and most are choosing to ignore student evaluations and feedback. Added to this, Ji-Yoon is navigating a complex relationship with her peer, fellow professor and noted writer Bill Dobson (Jay Duplass) who still is grieving over the death of his wife. As a single parent, she also has to contend with her adoptive daughter Ju-Ju (played by a brilliant Everly Carganilla), who at one point angrily tells her mother, “You take away everything good about life.”

In six episodes of less than half hour each, show creators Amanda Peet and Annie Wyman delve deep into several themes. As Ji-Yoon, Sandra Oh beautifully brings alive a character struggling to keep the department afloat at her harried and humorous best. While she has to battle against being constantly undermined, she is pulled apart in several directions, as her colleague’s grievances keep mounting. She calls her department a ‘ticking time bomb’ and aptly so. The tension is palpable, and you can’t help but watch in horrified fascination.

We see much of the time warp that the dysfunctional department is stuck in, through Professor Yaz McKay (Nana Mensah) a young, black, and student-favourite professor in the department. The course she is shown teaching initially is called ‘Sex and the Novel’, something that department veteran, professor Elliot Rentz (Bob Balaban) can’t wrap his head around. In another smartly-written clash, Rentz disapproves of McKay recalling how she asked her students to tweet out their favourite lines from Moby Dick. There’s a lot of inherent ageism and sexism that McKay has to contend with, while her methods are under scrutiny.

There’s also Joan Hambling (Holland Taylor in a standout performance) whose woes start from her office being relegated to a basement, to receiving some unsavoury feedback from her students about her outdated lectures. The big moments in the show belong to her, and the spirited monologue she breaks into about The Caterbury Tales is easily one of The Chair’s best scenes.

Despite being set in an American university, several themes that The Chair deals with are common to institutions across the world where major decisions are most often taken by people who haven’t stepped into a classroom or attempted to engage with students. Since the show came out, several women of colour in academia have spoken out and written pieces on how it has hit home, and has resonated with them. All this is brought alive on-screen by the near-perfect ensemble cast and the nuanced writing. There’s this and a lot more makes The Chair a must-watch.

And of course, Sandra Oh can do no wrong.

All episodes of The Chair are currently streaming on Netflix