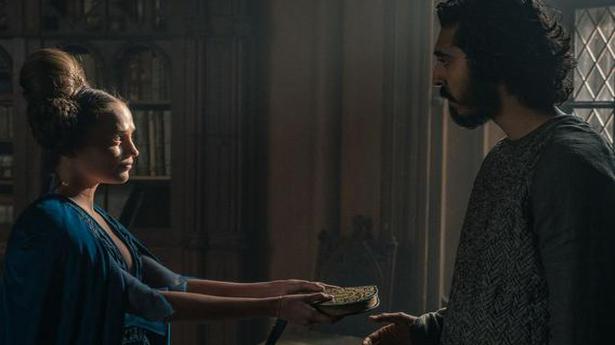 For all the historians who place King Arthur in the fifth century as the warrior who united Britain to fight the Saxon invaders, there are the many medieval stories of Camelot, chivalry, the Knights of the Round Table and the quest for the Holy Grail. Social anthropologists would posit the theory of the stories addressing the concerns of the time.

Tales of a quest, magic, forbidden love, and powerful wizards and enchantresses never grow old. So it is with the 14th century epic poem ‘Sir Gawain and the Green Knight’, which tells of Arthur’s nephew, Gawain, and his quest to find greatness and honour. When the Green Knight appears in Camelot on New Year’s Day and challenges the court to strike him down with proviso that the knight who does so should present himself in a year and a day to return the favour, Gawain steps in for Arthur. After a year, Gawain meets the Green Knight following several adventures to complete the challenge.

Directed, written, edited and produced by David Lowery, The Green Knight is a breath-taking presentation of the tale of a callow youth who discovers himself on a quest meeting several guides, including a lady without a head, a scavenger (Barry Keoghan) and a talking fox, along the way. The medieval poetic roots of the source material are acknowledged in the calligraphy of the chapters with the first one being ‘Filmic adaptation of chivalric romance by Anonymous.’

Apart from New Year’s Day from the poem being changed to Christmas, and the ending, The Green Knight follows the poem fairly closely. The two folkloric themes of the beheading game and the exchange of gifts from the poem find representation in the movie. The Green Knight (Ralph Ineson) is beheaded by Gawain (Dev Patel), and there is Lady Winifred (Erin Kellyman) who cannot find peace until her head is rejoined with her body. Gawain exchanges gifts with the Lord (Joel Edgerton) and Lady (Alicia Vikander) — none of the characters are named, indicating archetypes rather than specific people.

The Green Knight for all its adherence to the source material, tells a contemporary tale, highlighting the timelessness of myths and legends. We have all like Gawain asked, “Is this all there is?” at the end or beginning of an endeavour or like the Lord asks Gawain, “What do you hope to gain facing this hue?”

With the film, Lowery has proved that it is possible to tell an engaging medieval fantasy without the Game of Thrones mandated dragons, nudity or gore. The visuals are arresting — the sequence with the giantesses is deliciously dream-like as is Gawain’s wordless vision of his future. The costumes have a pleasing simplicity combined with a rich symbolism — how else would you explain the keys sown on Guinevere’s (Kate Dickie) gown?! Lady’s dissertation on the colour green, “Red is the colour of lust, but green is what lust leaves behind, in heart, in womb,” is informed and acute.

The cast led by a superlative Patel are uniformly good. Sarita Choudhury plays Gawain’s mother, the enchantress Morgan Le Fey, while Sean Harris is King Arthur — who is little less of a cipher thanks to his toothache and Emmet O’Brien plays Merlin.

The Green Knight has an irresistible look and aural signature to tell its tale that is as old as time and as present as now. And with Cursed cancelled after one season (sniff), The Green Knight is a glorious way to get your high fantasy fix.

The Green Knight is currently running in theatres