‘The Morning Show’ season two review: Into the deep of a post-scandal newsroom 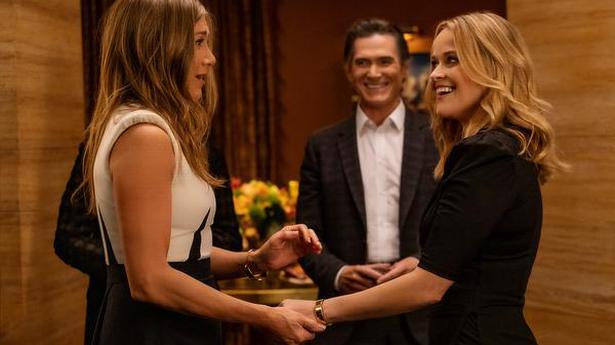 Jennifer Aniston and Reese Witherspoon go toe-to-toe in another riveting season of ‘The Morning Show’ that dives into issues around race, gender equality, the ‘woke generation’ and the Coronavirus

Too many times have I seen a remarkable first season followed by a lacklustre second season. It has happened with The Handmaid’s Tale, Halt and Catch Fire and Westworld, so at this point, I have learned to not go into sophomore seasons with high expectations – as was the case with The Morning Show.

I loved The Morning Show’s first season; it did not hide away from depicting the slick ugliness of newsroom competitiveness, the unpleasantness of pitting women against each other, the grey area of inter-office relationships and the debate around consent. I left season one thinking the explosive end would have even made the show a great limited series, open to interpretation. So when I went into season two, I had my doubts but was still pretty excited to revisit the world of UBA, Alex Levy (Jennifer Aniston) and Bradley Jackson (Reese Witherspoon).

The second season picks right up from the moment when Alex and Bradley out UBA’s Fred Micklen (Tom Irwin) and Mitch Kessler (Steve Carrell) and the rest of the network for encouraging and turning a blind eye to sexual misconduct at the company. A direct fallout from the tragic suicide of booker Hannah Schoenfeld (Gugu Mbathu-Raw). That scene was explosive and volatile and season two holds the answer to the rippling effects. Alex leaves UBA while Bradley fronts TMS with Eric Nomani (Hasan Minhaj). Meanwhile, Bradley wants a spot on the harder evening news segment – but as this goes to Eric, she is gutted.

Read More | ‘The Morning Show’ season one review: A thoughtfully-guided narrative around #MeToo

Post-Mitch scandal, TMS and UBA have been flayed open for all the world to see, and the series highlights how the deeply-flawed staff are forced to take hard looks at each other and themselves. Though Hannah does not make any appearances, her storyline informs a lot of what happens in season two.

Daniel Henderson (Desean Terry) pushes back at studio executives who consistently deprive him of promotions, producer Mia Jordan (Karen Pittman) finds that while she has put her affair with Mitch behind her, she struggles in making herself heard and weatherman Yanko Flores (Néstor Carbonell) has to deal with the ‘woke generation’ of audiences hate-tweeting about his microaggressions and various faux pas. And no, we have not forgotten about Mitch who has scampered off to a palatial mansion in coastal Italy as he mourns his golden days. The Morning Show refuses to be idealistic but rather a reflection of the messy environments of news networks, so does not dissect these too much, instead of using these plots to add to the main storyline.

The Morning Show has been clever by not giving too much of Bradley and Alex away, but we know that these characters are mavericks in their own right, hotheaded and the picture of white woman privilege. Season two put these two not just against each other once again when Alex rejoins UBA but also in the firing range of an unforgiving public that refuses to cave into the network’s PR salvaging.

We must not forget that Alex is still Alex; self-serving, egotistical, strong-willed, competitive and a little too toxic for her own good. While the newly-divorced tries to move past the UBA debacle, she comes to realise that one cannot truly redeem themselves by outing their company and pretend their own actions should be left unaccountable. As she holes up in her Pinterest-ready cabin in snowy Maine, she writes a tell-all that leaves out all traces of Mitch, instead choosing to focus on her rise to success. But obviously, her publisher and agent want the dirty details, especially considering journalist Maggie Brenner (Marcia Gay Harden) is coming out with her book documenting the UBA scandal.

Sometimes, a certain level of predictability lies with Alex– rich acting food for Aniston who continues to push the envelope with this flawed character. Playing Alex requires a lot of restraint except in the rare moments she flies off the wall and she really proves her dramatic chops here.

Bradley, despite calling UBA her home, is still not trusting of the network. She has grown closer with Cory Ellison, the resident puppetmaster, but she is not entirely sure of who her allies are. Being made into a blonde, Bradley is the network’s attempt at creating Alex 2.0, complete with the beaming smiles and cheesy singalongs – a stark contrast to the acerbic dark humour and the talent for starting fights on live television. But Bradley can only take so much and maybe a somewhat sadistic part of me loved seeing Bradley in a pressure cooker… but it just made for such great storytelling.

Billy Crudup’s Cory is one of my favourite characters; he smilingly pulled strings UBA did not even know it had to ensure his seat at Micklen’s former throne. Crudup’s poker faces are often the best parts of a scene because while it is interesting to watch Cory’s soft spot for Bradley making itself more known, we just know he has something brewing that will pull the rug out from under everyone. While most of the characters are given a very detailed back story, we know not much of Cory as he personifies UBA’s audacious visions.

One of the greatest decisions made by The Morning Show was bringing Stella Bak (Greta Lee) into the mix as Bradley and Yanko’s boss, taking Charlie Black’s (Mark Duplass) old position. However, she is the ‘token young diversity hire’ by Ellison but, aware of this, she proves herself time and time again. Lee balances cunning and vulnerability while making sure Stella is an asset to UBA.

What would a 2021 season of a newsroom show do without tackling the very real issue of Coronavirus? The Morning Show handles this really well, from the perspective of a news climate that was just coming to know of ‘some virus that is just like the flu’. As the horror of the virus makes itself known as the season progresses, the tone and the priority of everyone involved shifts.

This has been a strong second season for The Morning Show. The writers have made sure there are always stories to tell here and we sense a third season announcement very soon.

The Morning Show is streaming on Apple TV+, with new episodes every week.