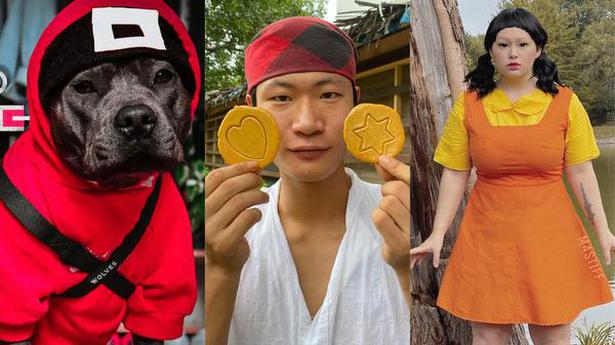 The popularity of the horror-survival series is seeing people getting inventive with cosplays, and recreating the children’s games in the show — from the Dalgona candy challenge to Red Light and Green Light

You cannot go a whole day without hearing about Squid Game, the new Korean survival-horror fest that has people looking at children’s games in a whole new way. Directed and written by Hwang Dong-hyuk, the series on Netflix follows a number of people with heavy debts competing against each other in a series of seemingly innocent games for cash prize. But the rug gets pulled out from under them when they realise they are not just playing for money, but for their lives — losers get killed instantly in these games.

Despite the bone-chilling displays of manipulation, peer pressure, and straight-up gaslighting seen throughout, the concept has enthralled millions around the world; people are bringing Squid Game home by recreating games such as Red Light, Green Light and the Dalgona candy cracking challenge, and also dressing up as their favourite characters.

The cosplay world, in particular, acted fast, already busy with recreations: the guards in their bright pink overalls, the Front Man with his geometric mask and black overcoat, the participants in their blue-green jumpsuits complete with tussled hair and bruises from the stress of the games and, of course, the massive singing doll with swivelling eyes.

Interestingly, though the lead character of the series is Player #456 / Seong Gi-hun (played by Lee Jung-jae), most cosplays are dedicated to Player #067 / Kang Sae-byeok (Jung Ho-yeon), the North Korean defector who is in the game to save her family across the border. 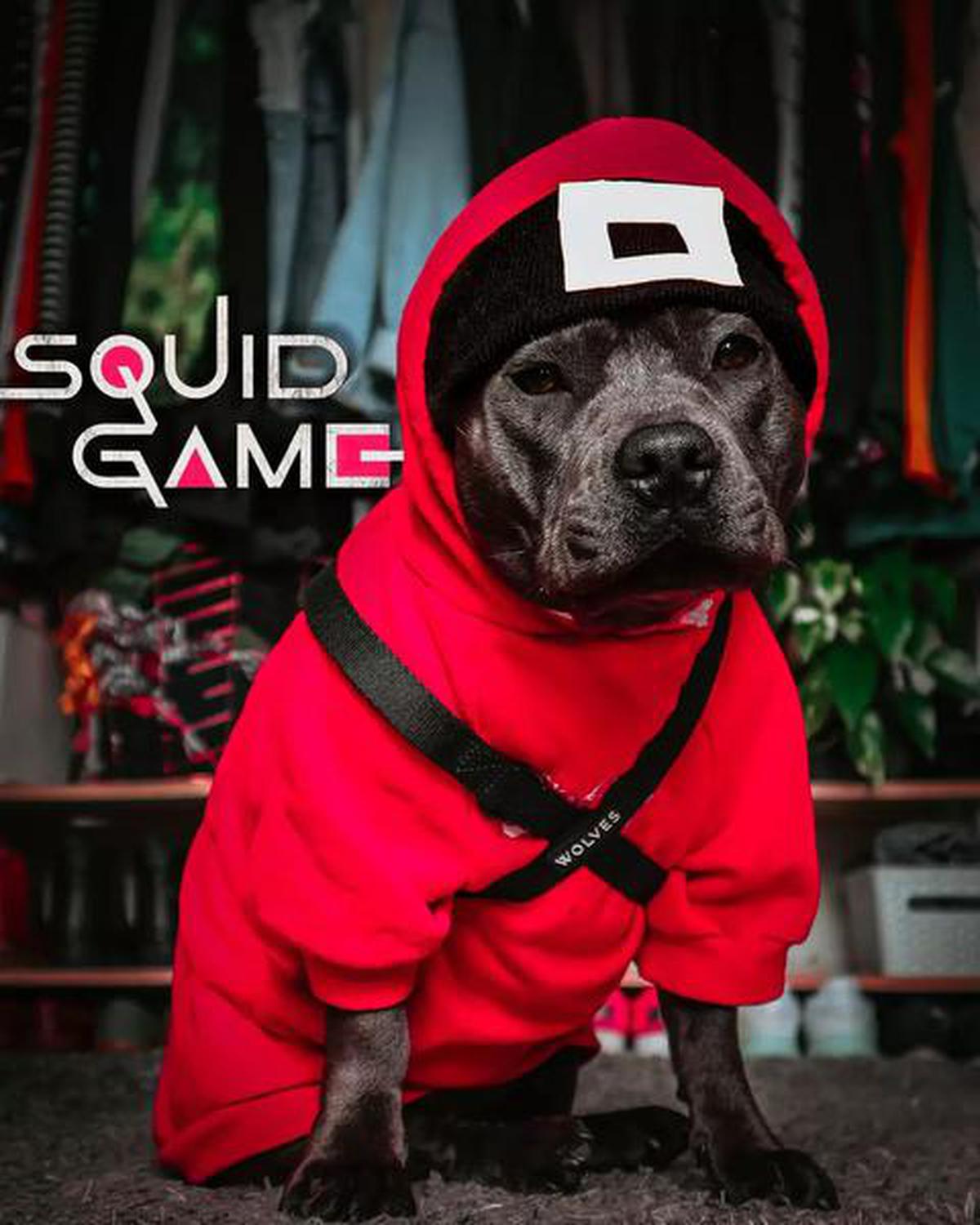 A simple option for cosplay has been that of the guards with the flamingo pink overalls and the full-face masks with white shapes. Probably the most creative cosplay has been that of Pania, a blue staffy in New Zealand whose owner dressed her up in a bright red hoodie, a black cross-body harness and a beanie with a white square on it. A couple of posts have gone up on Instagram (@paniathebluestaffy) on October 6 and 7, to hundreds of likes and comments.

Sameer Bundela, an award-winning cosplayer in Mumbai, is excited about the potential of Squid Game in this space. Often opting for sinister and complex characters, he appreciates the eye for detail. “I think that the Halloween season will see a lot of Squid Game costumes,” says Sameer, who adds, “but there will be some interesting renditions at comic conventions; the hype around the show will not die down, especially with how it ended. There is also an opportunity for group cosplays, just like with Money Heist. I have some costumes underway from other shows, video games and films, but if I had to choose a Squid Game cosplay to do, I would love to do one of the masked people such as Front Man or even the more intricate and glamorous ones of the wealthy visitors – just for complexity’s sake!” He particularly praises cosplayer M4stiff (pronounced ‘mastiff’) for her recreation of the singing doll; she donned a wig with the high-cut bangs and two ponytails, along with the orange tunic and yellow T-shirt teamed with knee-high socks and black shoes. But M4stiff took it to a sinister level with blackout contact lenses to mimic the soulless look of the doll that creeped everyone out.

She posted it to Instagram (@mastiffwitha4) on October 5 with the caption, “I sewed this outfit together around 3 am today in case that wasn’t obvious from the seams and the bad fit. I haven’t even had time to watch Squid Game but I had to make a little cosplay because I love seeing Koreans on top.” The post has received multiple comments of praise and more than 38,000 likes and counting.

Numerous India cosplay chat forums are already buzzing with discussion on collaborations with not just each other but sponsors who are very much aware of the Korean content popularity and want to work with cosplayers. Sameer agrees, pointing out entertainment companies should snag the opportunity to partner with cosplayers.

The giant robotic doll is featured in the first game of the series, as the host of Red Light, Green Light. The game is fairly common; you run towards a safe finish line while the host’s head is turned away. When they turn back towards the players, whoever is still moving is out. But in Squid Game context, ‘out’ means dead; and the doll’s eyes — which are actually cameras — swivel about to scan players’ body movements and the hidden rifles around the area shoot them if they move. To top it off, during the game, the doll sings in a childish monotone pitch, “mugunghwa kkoci pieot seumnida,” which roughly translates to “red light, green light, one, two, three.”

Speaking of Red Light, Green Light, US TikToker, TheBlondeJon (@theblondejon on Instagram), and his friends recreated the Red Light, Green Light game in an empty canal, complete with bright-coloured overalls, masks and paintball guns that were not fired but just aimed at the still-moving players. The video has gotten thousands of views across various platforms.

Meanwhile, in Bengaluru, Dhruv Viswanathan and his friends have summer plans to play the game. “I am reuniting with some old college friends, and we will play the game at our farm house next May. We plan to play the doll’s song on a loudspeaker and use water balloons filled with red water on those who still move, just to recreate the experience without hurting anyone. We have made a WhatsApp group just for that. We have already ordered overalls and masks from abroad which will take time to come,” he says.

He adds they will also be playing the marbles game which audiences see in the sixth episode; the objective is to play a game of your choice and take all of your opponent’s marbles. The group is also planning on learning Ojingeo Geim, the actual ‘squid game’ explained right at the start of the series.

… and the Dalgona challenge

Would it even be a Squid Game cultural wave without the mention of ppopgi, aka honeycomb toffee or Dalgona? In Squid Game, the contestants are tasked with carefully cutting out a traced shape from a Dalgona candy disc — if contestants broke into the shape, they are killed.

TikTok and Instagram are aflood with people attempting to make the candy at home – but it is no small feat. Its light yet rigid structure comes from baking soda mixed with sugar and water. Different versions of this candy in other countries include treacle or cinder toffee in the United Kingdom, honeycomb in South Africa and the United States, hokey pokey in New Zealand and gulali in Indonesia. 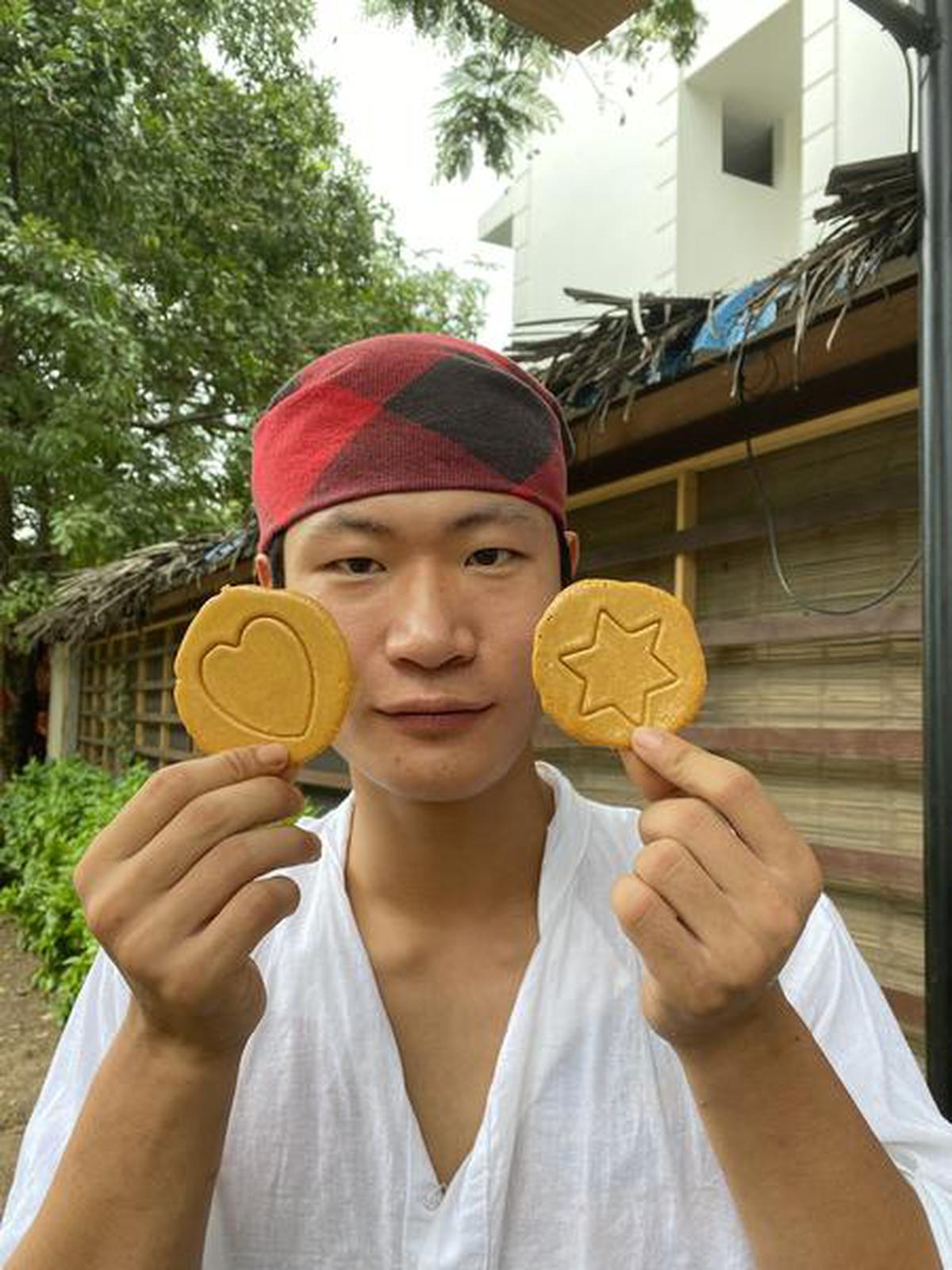 Jeon Minpyo, manager of Nowana (@nowana_auroville), a family-run Korean restaurant in Auroville, started offering the Dalgona candy challenge to customers on October 7. The restaurant shared to its Instagram Stories that they were prepping some unnamed treats and their followers were invited to guess what it would be; in the short video, the dead giveaways were the steel stamps used to press the shapes into the candy as well as the mention of a hint: ‘a popular Korean series.’

At Nowana, the game is nowhere near dangerous, says Minpyo with a laugh. Minpyo, who runs the restaurant with his mother and cousin-brother, says he would love for people to also know the history around this candy. During the Korean War, parents were unable to afford candy to give to their children so they discovered that mixing baking soda with dissolved sugar water was an inexpensive yet tasty alternative. When it cools down, it forms a porous hard candy that tastes sweet at first but has a slightly bitter aftertaste with a somewhat velvety mouthfeel. “It took a lot of trial and error to get the consistency right, so we spent a whole day perfecting the ratios! If a customer succeeds, they get to take one home.”

So, do you have any — hopefully safe — Squid Game plans ahead?