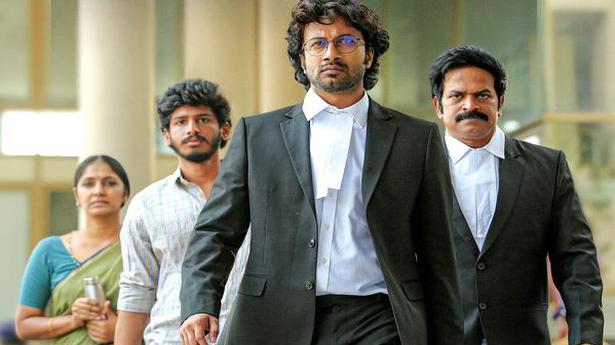 ‘Thimmarusu’, the Telugu remake of the Kannada film ‘Birbal’, is tauter and leverages the strengths of its lead man, Satya Dev

Remakes are tricky in a digital age where many movie enthusiasts are likely to have watched the original film. Unless a writer-director recreates the story to appeal to the sensibilities of viewers in a different region, the remake can end up being a pale shadow of the original. Thimmarusu is a remake of the Kannada film Birbal (2019). Director Sharan Koppisetty stays true to the original story by M G Srinivas and cuts the flab to present an engaging film. The film’s draw, apart from a reasonably cerebral story, is the presence of actor Satya Dev who plays a smart lawyer named Ramachandra with swag.

The swag is an essential component of Thimmarusu. It could have easily become an overtly emotional narrative where a wrongly accused character looks up to the hero to be his saviour. The wronged youngster, Vasu (Ankith Koyya), isn’t a weepy pushover. He has the angst of someone who has been framed and punished and Ramachandra has to work to gain his trust.

The opening act details the happenings on a rainy night in 2011 when a cab driver, who is also a police informer, is brutally murdered. Vasu who is passing by and informs the police, is framed and sentenced. Eight years later, Ramachandra re-opens this case when the cash-rich legal firm he works for decides to take up a few cases free of cost for those who cannot afford legal services.

In a partly Rashomon effect attempt, Ramachandra tries to look at the crime from different points of views. A few twists throw the investigating legal trio and Vasu off balance, until Ramachandra reveals all his cards and gets to the bottom of the puzzle.

The final reveal doesn’t come as a big surprise. But the situations leading to it keep us invested. A fight sequence in an elevator and another with a briefcase are masala touches that Satya Dev pulls off efficiently.

However, I wished the film hadn’t explained every methodology to spoon feed the viewers.

At a little over two hours, Thimmarusu holds attention and does away with songs. Sricharan Pakala, who by now can probably compose for thrillers with his eyes closed, accentuates the proceedings with his effective background score yet again. Appu Prabhakar’s cinematography complements the brooding thriller with earthy, darker tones.

Satya Dev does a fine balancing act in portraying a cerebral hero who can also handle the masala segments without looking out of place. Brahmaji keeps the laughs coming. Ankith Koyya, who made his presence felt in Johaar, is impressive in internalising the anger and helplessness of a victim. In her short role, Jhansi speaks less but conveys so much more with her body language. The leading lady’s character could have been written better; Priyanka Jawalkar plays it well but there isn’t much to make her stand out.

Thimmarusu doffs its hat to the historical personality of the same name who served as the prime minister to Krishnadevaraya. While the Kannada film is part one of a trilogy, it remains to be seen if the makers of Thimmarusu too would follow suit with further investigations.

Sharan, whose previous film Kirrak Party was also a remake, presents an entertaining thriller to welcome the audience back to the theatres in Telangana and Andhra Pradesh.