‘Vivaha Bhojanambu’ movie review: Satya and Srikanth Iyengar make an impression in a film that humours in parts 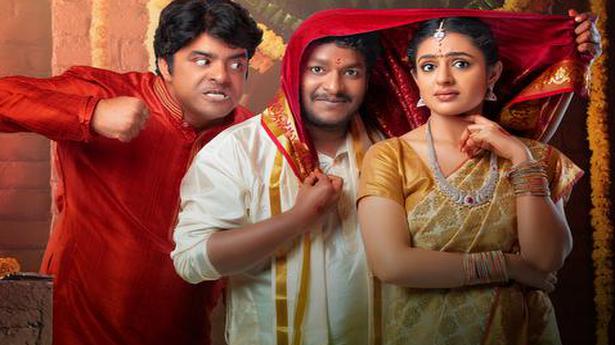 The Telugu comedy Vivaha Bhojanambu directed by Ram Abbaraju doesn’t take itself seriously and hopes that neither do we, as viewers. The beginning of the pandemic and the lockdown in 2020 is leveraged for a lot of silly fun. Some of it translates to laugh aloud moments while others fall flat. Comedian Satya takes centrestage as the lead actor. He and Srikanth Iyengar try to shoulder the film that slips into a dull zone once the laughs dry up.

Satya is cast as Mahesh, a miserly insurance agent from a middle class background who believes that he is only being thrifty. He falls in love with Anitha (Aarjavee Raj) who hails from a well-to-do family. Predictably, there are snide remarks about Mahesh’s background and Anita’s family wonders why she chose a guy who, according to conventional norms of society, isn’t handsome, wealthy or has a good job.

This itself could have set the stage for a story of an unlikely romance. Think Colour Photo in a lighter vein. Vivaha Bhojanambu heads in a different direction, to milk the lockdown setting for humour.

The fun begins once the couple is engaged with the blessings of the girl’s grandfather, much to the disbelief of the girl’s father Ramakrishna (Srikanth Iyengar). Ramakrishna demands that Mahesh and his family take up expenses for the wedding. Mahesh is the kind of miser who would buy a sweet box for decorative purposes and hope to return it to the store! The prospect of having to spend for the wedding puts him on the edge.

Hell breaks loose when the bride’s family is stationed at the groom’s house all through lockdown. All those silly Whatsapp jokes about guests overstaying their welcome find their way into the film. Mahesh has to deal with peculiar characters — an elder who has a weakness for sweets, another elder who complains about watery coffee and a lack of cashew nuts in the upma, and that upma has become the staple breakfast. Then there’s the girl’s uncle (the late TNR) whose mathematics isn’t even elementary, giving rise to insipid jokes. Each time the Prime Minister comes on television to announce an extension of lockdown, it sets the ball rolling for more fun.

Satya and Sudarshan as the friend try to keep things going, but there’s a limit to how far these lockdown jokes can be stretched. After a point, the gags become as tiresome as the never-ending lockdown. Remember those reports about people trying to travel in ambulances? That too gets milked for humour, with producer and actor Sundeep Kishan appearing in an extended cameo as the ambulance driver speaking the Nellore accent. He hallucinates about his dead girlfriend and keeps belting out twisted adages like ‘customer is dog’. This soon becomes caricaturish.

The latter portions that try to show the good nature of Mahesh are quite contrived. The million dollar question of how Anita and Mahesh fell in love also falls flat thanks to a lacklustre flashback. Has this portion been better, we might have rooted for them and their wedding.