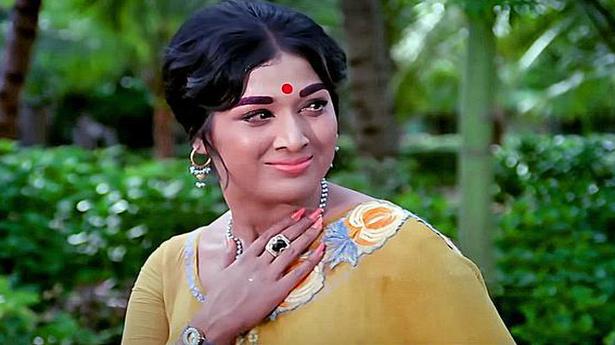 As the iconic love story reaches a landmark on September 24, its leading lady Vanisri goes down memory lane, sharing nuggets from the making of the blockbuster

As the Telugu audience looks forward to seeing Naga Chaitanya and Sai Pallavi in Love Story releasing on September 24, Prema Nagar that established ANR and Vanisri as one of the successful pairs in Telugu cinema released 50 years ago on this day.

An epitome of glamour and substance, Vanisri, charmed a generation of movie buffs with her style and verve. A modest beginning notwithstanding, she reached the pinnacle of her career portraying roles on a par with the Telugu heroes of the ‘70s.

When Koduri Kausalya Devi’s popular novel Prema Nagar was planned for celluloid, producer D Ramanaidu and director K Prakash Rao did not look beyond Vanisri for the female lead. Acting in her first full-length colour film, she played the feisty and independent Latha opposite Akkineni Nageswara Rao (ANR) for whom playing the rich and spoilt lover-boy Kalyan was a cakewalk.

Released under the Suresh Productions banner on September 24, 1971, Prema Nagar ran for 750 days. Vanisri plays Latha an air hostess who is the sole breadwinner of her family. She meets the alcoholic happy-go-lucky Kalyan during one of her flights and later, after quitting her job, lands the job of his secretary. She makes him give up drinking and love blossoms between them, much to the chagrin of Kalyan’s zamindar family. Many misunderstandings and heartbreaks later, the reconciliation leads to a happy ending.

Speaking to us over the phone from Chennai, Vanisri who played the role with elan, attributes the film’s success to writer Acharya Atreya and Prakash Rao. “They were veterans, and confident of their work; they did not have to prove anything to anyone. Whereas for Ramanaidu, who had faced a few flops earlier, as well as for cameraman Venkatratnam and I, it was a challenge; we had to prove ourselves. With the success of the film, we felt like we had earned a PhD,” laughs Vanisri. A year later, she went on to reprise her role in the Tamil version Vasantha Maligai with Sivaji Ganesan.

A particularly striking performance from Vanisri is a scene where she is accused and humiliated for stealing a gold necklace from the zamindar’s house. Kalyan shows everyone that the necklace is with him and takes her away from there. While escorting her to the car, he asks, “Why did you do it Latha?” A stunned Latha turns to look at him. Vanisri’s brilliance comes to the fore then — the hurt, pain and disbelief that the man she loves does not believe her either — all expressed through her eyes. “That is my favourite scene. I felt Latha’s pain; she could tolerate it when others accused her but when her lover asks her that question, her heart breaks. I continued to weep even after that shot ended. Prakash Rao garu, a man of few words, came up and patted my shoulder,” recalls Vanisri adding, “When I repeated the scene for Vasantha Maligai, the raw emotion was missing, it was more of enacting a role well for the scene.”

Vanisri was also convincing when playing the veena for the melancholic ‘Evaro Raavali…’. Vanisri recalls, “I did not know how to play the veena. An artist would sit in front of me with another veena while the camera rolled and I would follow her hand movements for the shot.”

A diva in her heyday, Vanisri set many a trend with her sari-draping styles and hairdos. As an air hostess in Prema Nagar, her exaggerated hair bun became the talk of the town. “The England-returned hairstylist Aspi, specially brought in for my hair styling, backcombed my hair and created this huge bun that was typical for air hostesses those days. My mother would get upset seeing my hair becoming a mess in the process,” she laughs. She also shares that she became slimmer during the shoot of Vasantha Maligai and with improved makeup, looked more glamorous. “I think even the colour technology had got upgraded by then, so the overall look improved in the Tamil version.”

Admitting to being a bit overwhelmed acting with ANR and Sivaji, Vanisri says she felt like a kindergartner in their presence. “Acting with ANR, who had already acted in more than a hundred films by then was a learning experience. It was the same with Sivaji, just by interacting with him I would feel encouraged to give my best.”

Vanisri belongs to the generation of heroines after Bhanumati, Anjali Devi, Savitri, Jamuna and Krishna Kumari, who had all acted with ANR and NTR. It did not bother her that her heroes were much older than her, “My role was more important for me; I used to feel privileged to be cast opposite these legends.” Prema Nagar was remade into Hindi with Rajesh Khanna and Hemamalini in 1974. “They considered me and Dilip Kumar but that did not happen. Today I am happy that Prema Nagar and Vasantha Maligai became a milestone for me, ANR, Sivaji and Ramanaidu.”